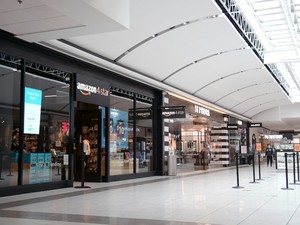 As the country faces spiking Covid-19 cases, U.S. consumers steered their dollars towards e-commerce outlets in October, according to government data released Tuesday.

Retail sales overall grew 0.3 percent from September, below expectations and the slowest rate in months, the Commerce Department report said.

In a grim sign for main street brick-and-mortar retailers, the data indicate slowing growth in a sector that bounced back from the pandemic downturn faster than most others thanks to massive government assistance that kept consumers flush with spending money.

However, most of the congressionally approved spending programs have expired and lawmakers in Washington have been unable to agree on a new stimulus package, raising fears of another slowdown in consumption.

"This is consistent with a recovery that's positive but losing momentum and at risk of being knocked off track in the winter," Ernie Tedeschi of Evercore ISI said of the data on Twitter.

The United States is also grappling with a nationwide spike in Covid-19 cases that in some areas are hitting levels worse than at any other point in the pandemic, and the data showed consumers again shifting spending patterns to avoid exposure.

Sales at non-store retailers, such as websites, jumped 3.1 percent from September and at electronics and appliance stores rose 1.2 percent, according to the report.

Building materials and gardening equipment and supply dealers saw 1.2 percent growth month-on-month but were up 19.5 percent for the year, amid a boom in home sales and construction amid low mortgage borrowing rates.

And motor vehicles and parts dealers edged up 0.4 percent as more people purchased cars to cope with the risks of the pandemic.

However, most other sectors saw sales decline in the month, including food and drinking places, which was hard-hit by business shutdowns to stop the virus and fell 0.1 percent.

With some states again imposing virus-containment measures that could disrupt business, Ian Shepherdson of Pantheon Macroeconomics said October's measly growth may not be repeated in future months.

"The October sales numbers are old news, and the outlook for November and December, with the exception of online, is looking very uncertain," he said in analysis.