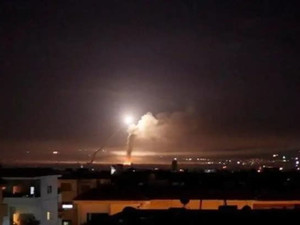 Israeli warplanes struck Syria Wednesday, hitting Iranian targets and killing 10 Syrian and foreign fighters in what the Israeli army called a retaliatory attack after explosive devices were found near one of its bases on the occupied Golan Heights.

The air strikes came hours before U.S. Secretary of State Mike Pompeo was to land in Israel for talks including on Iran, in what was likely to be his last visit to the staunch American ally before President Donald Trump leaves office.

Syrian state news agency SANA said the strikes had killed three of its soldiers and wounded another.

The monitoring group Syrian Observatory for Human Rights said 10 people were killed, including foreign fighters as well as Syrian soldiers.

The foreigners included five fighters who were "likely Iranian and belonging to the Quds force" as well as two pro-Iran fighters of undetermined nationality, the Britain-based monitor said.

Israel has carried out hundreds of air and missile strikes on Syria since civil war broke out there in 2011, targeting Iranian and Lebanese Hizbullah forces as well as Syrian government troops.

Israel rarely acknowledges individual strikes, but has done so when responding to what it describes as aggression inside Israeli territory.

Israel's military said it had discovered improvised explosive devices (IEDs) on its side of the armistice line on the Golan Heights on Tuesday.

Most Arab residents of the Israeli-occupied Golan Heights retain Syrian citizenship, having spurned the offer of Israeli papers.

Conricus said Israel had carried out retaliatory strikes against eight separate targets inside Syria, from the armistice line on the Golan all the way to the southern outskirts of the capital Damascus.

He said they included three Iranian command centers -- a headquarters in the Damascus airport, a Quds Force base in the headquarters of Syria's seventh army division and a "secret military site which served as a hosting facility for senior Iranian delegations."

"We hope now that the message is clear -- that it is unacceptable that the Syrian regime allows and tolerates and facilitates the use by Iranian forces of Syria as a launchpad for attacks against Israel."

Israel and Syria, still technically at war, have a border along the Golan Heights, which Israel has occupied since the Six-Day War of 1967.

Iran has been a key ally of Syrian President Bashar al-Assad's regime throughout the civil war that erupted after the brutal repression of anti-government protests and has killed more than 380,000 people.

The air strikes came hours before Pompeo was to land in Israel, for talks on Iran that are likely to focus on Israeli fears of a softer policy towards Iran after the Trump administration hands over to Democrat Joe Biden in January.

Israel Prime Minister Benjamin Netanyahu, who called Trump his country's strongest-ever ally in the White House, has heaped praised on the administration for its hardline approach towards Iran.

Trump's so-called "maximum pressure" campaign against the Islamic Republic has included sanctions and scrapping of the nuclear deal agreed between Tehran and world powers during Barack Obama's presidency.

Israeli experts have said Netanyahu is concerned that the president-elect, Obama's former vice president, will seek to re-engage Iran diplomatically, possibly by restoring the 2015 nuclear deal Trump pulled the U.S. out of.

Bahraini Foreign Minister Abdellatif al-Zayani was also in Israel for the first visit by a senior official of the Gulf Arab state since it signed a normalization deal with Israel on September 15.

The deal was condemned as a betrayal by Iran and its regional allies.

How Sad... I am all verklempt over these unjustifiable air raids. I just cannot imagine what these Syrian and Iranian heroes might have felt when they lost their limbs, or felt the simmering heat of the exploding bombs as their charred bodies splattered all over the scene of the explosion.

Making the World a Better Place...
10 Dead Shia Terrorists at A Time!

14 May 2018, 17:56
Nassrallah revealed that Israel was warned via a foreign state that “the next response would be in the heart of occupied Palestine".

Yalla hassouna Yalla get your big rocket ready and become a martyr for the cause. 69 ugly virgins waiting for you to break them in

Gracias Israel. You have two more months to kick the crepes of assad and hassouna.