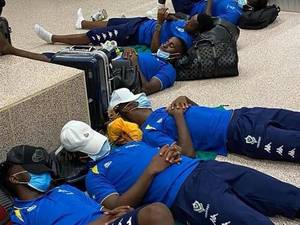 The sight of Arsenal star Pierre-Emerick Aubameyang and his Gabon teammates sleeping on an airport floor marred an otherwise successful two rounds of Africa Cup of Nations qualifying.

Gambian authorities would not allow the visiting Gabonese to leave the terminal because they said the delegation had not complied with conditions aimed at combating the spread of the coronavirus.

Confederation of African Football (CAF) official Omar Sey told reporters in Banjul that the Gabonese did not produce Covid-19 test results, while insisting they had been performed before leaving Libreville.

The Gabonese then had to hand over passports and a standoff ensued with the visiting players forced to sleep on the floor for almost six hours from their midnight arrival before going to their hotel.

CAF responded to the incident by ordering an investigation amid criticism from former African Footballer of the Year Aubameyang.

Gabon lost 2-1 to the Gambia, leaving the teams sharing the Group D leadership, one point ahead of the Democratic Republic of Congo with two rounds remaining.

Although prolific Liverpool scorer Mohamed Salah and Arsenal midfielder Mohamed Elneny tested positive for Covid-19, the widespread disruption of the 48-match schedule that many feared did not materialize.

Captain Riyad Mahrez led by example as Algeria won at home and drew away against Zimbabwe in Group H to stretch an unbeaten run to 22 matches since October 2018.

His solo goal sealed a 3-1 victory in Algiers and an even more spectacular effort gave the Desert Foxes a two-goal advantage in Harare that they surrendered in a 2-2 draw.

Dropping two points did not, however, prevent Algeria qualifying for the finals with two matches to spare, leaving Zimbabwe, Botswana and former champions Zambia to challenge for the other qualifying place.

The victories over the disappointing Togolese were achieved in the absence of talisman Salah, who contracted Covid-19 before the first match.

Elneny tested positive for the virus in Lome and missed an impressive 3-1 win with Aston Villa forward Mahmoud Trezeguet among the goals.

African Footballer of the Year Sadio Mane scored the goal that secured 2019 runners-up Senegal a place at the next finals, and his country boast the only 100 percent record after four matchdays.

The Liverpool star broke the deadlock near Dakar in a 2-0 victory and snatched the only goal of the return match eight minutes from time in sweltering Bissau.

While Senegal have a maximum 12 points, tiny island nation Sao Tome e Principe hold the unwanted record of being the only team not to secure at least one point so far.

Another island nation, the Comoros, look set to reach the Cup of Nations finals for the first time, mainly thanks to taking four points off Kenya and partly due to the Egyptian revival.

Egypt and the Comoros have eight points each, Kenya three and Togo are out of contention with just one, and the joint leaders can clinch qualification by taking one point each in matchday 5.

A key to the growing strength of the Comorans is stability with Marseille-born coach Amir Abdou in charge since 2014 of a tight-knit squad.

The midas touch of famed French coach Claude le Roy has deserted him since taking charge of Togo, who share with Sao Tome, Chad and eSwatini the embarrassment of being eliminated with two rounds to play.

Before setting up residence in Lome, Le Roy won the Cup of Nations with Cameroon and left Senegal, the Democratic Republic of Congo, Ghana and Congo Brazzaville with stronger squads than he inherited.

While woeful defending in a 3-1 home loss to Egypt was not the fault of the 72-year-old, the coach is always the first target in African football when things go wrong.