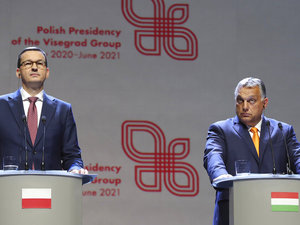 Poland and Hungary toughened their rhetoric on Wednesday in a row that is blocking the European Union's long-term budget and coronavirus rescue on the eve of a summit in Brussels.

The two countries, which are both accused by Brussels of rolling back democratic freedoms, are opposed to the EU's plans to tie funding to criteria on rule of law.

But the European Parliament said that "no further concession will be made on our side" and France warned there might be a way of proceeding without the two countries vetoing the 1.8-trillion-euro package.

Speaking in Warsaw, Morawiecki struck a defiant tone and warned that imposing new conditions for funding could lead eventually "to a break-up of the EU".

"This is a turning point in EU history. Making decisions based on the arbitrary provisions of regulation may lead to its collapse," he said.

Morawiecki's nationalist government has pushed through a string of controversial judicial reforms that have put Poland on a collision course with the EU over concerns the changes undermine the rule of law.

In Hungary, Orban has been implacably opposed to schemes to resettle refugees arriving in other parts of the continent, notably Italy and Greece.

Slovenian Prime Minister Janez Jansa, a close ally of Orban on migration, weighed into the row on Wednesday, saying EU institutions should "not be involved in member states' internal political conflicts".

But other Central and East European states including Czech Republic, Romania and Slovakia opposed the vetoes.

Orban said in a statement that Hungary had used its veto because it saw the rule of law conditions as tantamount to "blackmailing" countries that oppose migration.

"In Brussels today, they only view countries which let migrants in as those governed by the rule of law," Orban said.

"In our view, tying economic and financial questions to political debates would be a grave mistake, one that would undermine Europe's unity," he said.

But Orban also hinted at a possible compromise offer, saying that a deal should contain a clear definition of rule of law and a mechanism for countries to appeal sanctions.

"Without objective criteria and possibility of legal remedy, no procedure that aims to penalize member states should be based on it," he said.

EU leaders thought they had resolved disputes over the seven-year EU budget and associated stimulus plan at a marathon four-day-and-night summit in July.

They have since also resolved differences with the European Parliament over spending priorities, and the trillion-euro budget and 750-billion-euro stimulus package is ready for approval.

The vetoes triggered outrage in Brussels, with senior European diplomats saying there was no question of the other countries agreeing to loosen the rule of law condition.

"We are looking, as a last resort, at how to proceed without the countries that are blocking" a deal, he said.

Beaune said EU officials would consider "clarifications" to the rule-of-law requirement, "but certainly not by calling it into question, because our values and our European project are at stake."

"Europe cannot be held hostage by a certain number of governments that do not want to move forward, that do not respect the bedrock of our political project," he warned.