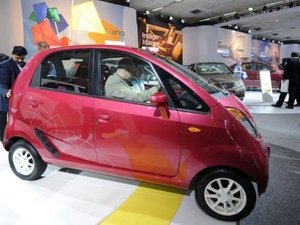 When India's Tata Motors' Nano went on sale in 2009, the concept of the "world's cheapest car" in one of the world's fastest growing auto markets seemed pre-destined for commercial success.

Logically, the strategy appeared faultless -- offering an affordable solution to millions of aspirational lower-middle class Indian families wanting to make the social and practical leap from two wheels to four.

But after several years of disappointing sales, it has now become clear that the snubnosed hatchback's unique selling point -- its price -- was actually a commercial sticking point.

Rather than embracing the Nano, the status-conscious consumer base that was its prime target has largely shunned the "cheap" tag of the $2,800 vehicle and opted for slightly pricier rivals, or second-hand vehicles costing the same.

"A Nano is always bandied about as a poor man's car. Nobody wants to be caught with it," said Punnoose Tharyan, editor of India's Motown magazine.

Sales are far off the target of 25,000 cars a month, and the Nano plant, with an annual capacity 250,000 units, produces only 10,000 a month, according to R. Ramakrishnan, business head of Tata Motors passenger cars.

"The car didn't project the right image," said Indian automobile expert Murad Ali Baig. "Also, for the same cost as the Nano there are quite respectable second-hand cars -- with air conditioning."

The base model, sold without air conditioning which is a disadvantage in India's searing heat, costs 140,880 rupees ($2,800). The premium version -- air conditioning, central locking and power front windows -- is 196,959 rupees.

The Nano ran into trouble from the start when a land acquisition row forced Tata to abandon a nearly completed plant and build another, badly delaying production.

There were also safety concerns after a number of cars burst into flames.

Tata boss Ratan Tata conceded this month that mistakes had been made, which had fuelled the perception of the Nano as a "poor man's" vehicle.

"Whatever stigma has been attached to it, we will undo," Tata said, insisting that the Nano had always been intended as an "affordable, all-weather, family car."

To get sales on track, Tata has given the car a makeover, making it available in more colours, including "champagne gold" and "papaya orange," and sprucing up the interiors while keeping prices unchanged.

It has also offered a "Tata Nano Happiness Guarantee", which more than doubles the car's warranty to four years from 18 months, and throwing in a maintenance contract for just 99 rupees a month.

It is offering "fast-track" financing for buyers wanting loans to purchase the car -- with loan approvals in 48 hours. Also, buyers can put down just 15,000 rupees ($300) to drive a Nano out of the showroom.

"Let’s say at first it moved a little slowly in the market place, but now we have understood what the customer requirements are," said Tata Motors India managing director Prakash Telang.

And Telang remains convinced that the potential Nano market remains as vast as its makers originally predicted.

Typical of the buyers Telang has in mind is Dira Singh, who has a wife and two children and recently upgraded from a motorcycle to a shiny blue Nano.

"The Nano was in my budget. It wasn't costly and that's why I took it," Singh said, standing proudly beside the vehicle. "It will protect my family."