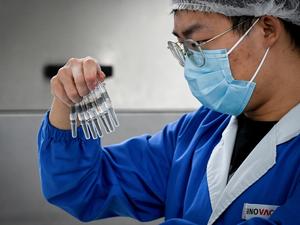 Nearly a million people have taken an experimental coronavirus vaccine developed by Chinese company Sinopharm, the firm said, although it has not yet provided any clear clinical evidence of efficacy.

Sinopharm's chairman told media this week that nearly a million people have now received their vaccine for emergency use, though he did not provide a specific figure.

"We have not received a single report of severe adverse reaction, and only a few had some mild symptoms," Liu Jingzhen said in an interview re-published by the state-owned firm on Wednesday.

China has been bullish about the development of its vaccine for the new virus -- which first emerged in the centre of the country late last year -- with four vaccines now in late-stage testing.

Many of the trials are taking place overseas, as China has largely brought the virus under control within its borders.

Sinopharm is testing two vaccines in late-stage trials in countries including the UAE, Bahrain, Egypt, Jordan, Peru and Argentina.

The company claimed this week to be "leading the world in all aspects" of vaccine development, although it did not offer clinical evidence from ongoing trials.

Instead it cited anecdotal experiences from those who have been inoculated, including "construction personnel, diplomats, and overseas students" who it said have gone on to visit more than 150 countries after vaccination without being infected.

President Xi Jinping has declared that any Chinese vaccine would be a "global public good", after the country came under criticism, particularly from the US, for its early handling of the outbreak.

Many who have been inoculated in China are not formal participants in drugmakers' trials and are said to have done so voluntarily.

Competition has intensified among pharmaceutical companies racing to develop a Covid-19 shot, with two vaccines -- one by US company Pfizer and its German partner BioNTech, and another by US firm Moderna -- publishing large-scale trial data this month that showed their jabs were around 95 percent effective against Covid-19.