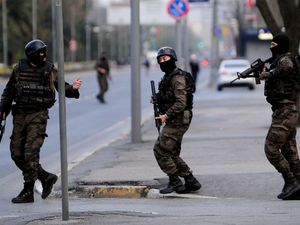 Turkish authorities have issued arrest warrants for 101 people including lawyers in a wide-scale operation aimed at outlawed Kurdish militants, a judicial source said on Friday.

Police conducted simultaneous raids in Diyarbakir, in the Kurdish-majority southeast, Istanbul, Izmir and Adiyaman as part of an investigation into the Democratic Society Congress (DTK).

The group is accused of links to the outlawed Kurdistan Workers' Party (PKK).

Turkey and its Western allies designate the PKK a terror group. It has waged an insurgency against the state since 1984 which is believed to have killed tens of thousands.

Police rounded up at least 72 suspects, including 24 lawyers, the source, who spoke on condition of anonymity, told AFP.

Four others could not detained as they had tested positive for the coronavirus, the source said.

The Diyarbakir bar association condemned the latest arrests, which targeted 17 of its members.

"The Diyarbakir bar has never bowed to the threat of detentions and arrests and will never do so," it said in a statement on Twitter.

"These operations indicate a desire to stifle the voice of the Diyarbakir bar and is a direct intervention in the activities of the civil society."

The opposition pro-Kurdish Peoples' Democratic Party (HDP) has also been on the radar of Turkish authorities for its alleged links to the PKK and dozens of its mayors -- elected in the 2019 local elections -- have been ousted.

The HDP is Turkey's second-largest opposition group in the parliament.