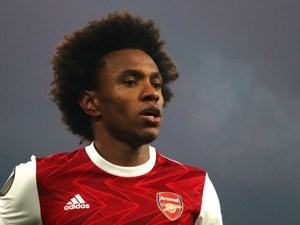 Arsenal boss Mikel Arteta said he has dealt with winger Willian's unauthorised trip to Dubai, but would not reveal if the Brazilian will be dropped for Sunday's Premier League trip to Leeds.

Willian was pictured on Instagram at the Nusr-Et steakhouse in Dubai with celebrity owner Nusret Gokce, more commonly known as "Salt Bae".

Under coronavirus restrictions in the England, international travel is not permitted apart from for limited purposes such as work or education.

However, the United Arab Emirates is not on the UK's quarantine list and the 32-year-old Brazilian has been able to return to training this week.

"Whatever happens with things we don't expect we will try to resolve them internally," Arteta said at his pre-match press conference on Friday.

"That's been dealt with and explained. We had a conversation and I explained what I was expecting.

"For every player there are a lot of personal factors at the moment."

Arteta has had to deal with a series of issues over the international break as Mohamed Elneny and Sead Kolasinac tested positive for coronavirus when with their national teams.

David Luiz and Dani Ceballos are also reported to have had a training ground bust-up that resulted in Luiz hitting Ceballos in the face.

And Gunners' captain Pierre-Emerick Aubameyang had to spend a night on an airport floor with his Gabon teammates as they were delayed getting through customs in Gambia.

"I said to him I'm sure for many years you haven't slept on the floor. Take it as an experience and when you are in your bed at night, think about how good it is, how comfortable it is and how lucky you are."