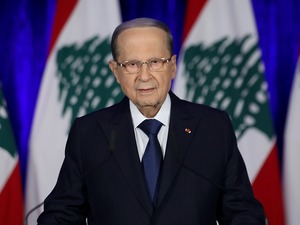 The Lebanese Presidency on Friday dismissed remarks by Israel’s energy minister about Lebanon’s stance in the negotiations over sea border demarcation.

In a statement, the Presidency’s press office shrugged off as “baseless” Yuval Steinitz’s claim that Lebanon has changed its stance “seven times.”

"Its current position contradicts not only its previous one, but also Lebanon's stance on its maritime border with Syria, which takes into account Lebanese islands close to the border," Steinitz added.

Earlier on Thursday, Aoun had set out Lebanon's position on the maritime border, which he said should be "based on the line that departs on land from the point of Ras Naqoura.”

The demarcation should be "according to the general principle known as the median line, without taking into account any impact of the occupied Palestinian coastal islands," Aoun tweeted, referring to the Israeli coastline.

Lebanon and Israel, which remain technically at war, opened negotiations on the border dispute under U.S. and U.N. auspices last month to clear the way for offshore oil and gas exploration.

They have been negotiating based on a map registered with the United Nations in 2011, which shows an 860-square-kilometer (330-square-mile) patch of sea as being disputed.

But Lebanon considers that map to have been based on wrong estimates.

For 9 years the two sides have had before them a map showing 860sq. kms. as being disputed, and based on those maps the present round of negotiations began.
To claim another map now is certainly a change of stance on behalf of Lebanon.
What would Lebanon have said if Israel had changed its stance and claimed an additional 1430 sq. kms. Of course they would have objected.

If it is true what you are telling , I agree that's a change of stance, nevertheless an impartial party should look at both maps to see which one represents the real situation, based on the outcome
continue the discussion and try to find good(win/win) compromise with the previous situation.

The 9 year old map IS the real situation.

I’m sick and tired of this deserter in diapers.

So what the Lebanese President is saying is that his country agreed to start the present discussions under false pretenses.

There is no Lebanese president.... it is hezbollah. After the U.S. sanctions on Bassil, Lebanon came up with new demands uncalled for.