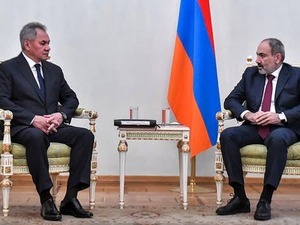 "We hope we can reinforce cooperation with Russia not only in the security sector but also military and technical cooperation," he said, according to his press service.

"Of course, there were hard times before the war, but the situation today is even more difficult."

Pashinyan was speaking during a meeting in Yerevan with Russian Defence Minister Sergei Shoigu, a day after Azerbaijani troops moved into territory formerly held by Armenian separatist troops bordering Nagorno-Karabakh.

Armenia and Azerbaijan agreed a Russian-brokered ceasefire on November 9 after six weeks of fighting in the self-proclaimed republic. Under the agreement, Azerbaijan will regain control of three districts been controlled by the separatists since the 1990s.

Around 2,000 Russian peacekeepers will be deployed in the disputed territory of Nagorno-Karabakh under the terms of the deal.

"For us, the main thing is to prevent bloodshed," Shoigu said Saturday. He was part of a major Russian delegation in Yerevan that also included Foreign Minister Sergei Lavrov.

Separatists in Nagorno-Karabakh and several surrounding districts had captured the territory and claimed independence following a post-Soviet 1990s war that left around 30,000 dead.

Their claim was not recognised internationally, however, even by Armenia.

As part of the peace accord, Armenia agreed to return 15 to 20 percent of Nagorno-Karabakh territory captured by Azerbaijan in recent fighting, including the historic town of Shusha.

Some opposition figures have denounced Pashinyan as a traitor for having agreed to what they see as the humiliating terms of the deal, but while he has sacked defence and foreign ministers, he has refused calls for him to step down.

Armenian police told AFP they had detained dozens of protesters Friday at a rally in Yerevan where demonstrators calling for Pashinyan to resign formed a human chain and blocked major roads.