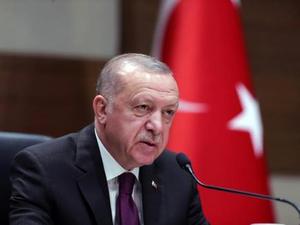 President Recep Tayyip Erdogan on Saturday called on the European Union for dialogue, warning the bloc not to become a tool for enmity during escalating tensions over the eastern Mediterranean.

Turkey's deployment of a vessel to search for gas in waters claimed by Greece set off a fierce war of words with EU member states, who early this month extended sanctions against Ankara for another year.

The measures included allowing visa bans and asset freezes against individuals involved in contested gas exploration in the Mediterranean.

"We expect the EU to keep its promises, not to discriminate us or at least not to become a tool to open enmities targeting our country," Erdogan said in a video address to his ruling party congress.

"We don't see ourselves elsewhere but in Europe," he added. "We envisage building our future together with Europe."

Erdogan's message comes as EU leaders are to decide in a December summit whether to impose further sanctions over Turkey's recent activity.

Turkey's exploration ship Oruc Reis remains at the centre of the tensions and on Saturday, Ankara extended its mission in the eastern Mediterranean until November 29, despite protests from Athens.

In the same speech, Erdogan said Turkey wanted to "actively use its long and close alliance relations with the United States for a solution to regional and global problems".

He was not among the first world leaders to congratulate President-elect Joe Biden.

And while he enjoyed close ties with US President Donald Trump, there have been tensions between the two countries over several issues.

Turkey's purchase of a high-tech Russian missile defence system angered Washington, while Ankara has protested the US refusal to extradite a Muslim cleric Erdogan blames for staging a failed 2016 coup.

Look at that dictator monkey... he thinks he is a sultan...

Erdogan - Dream on. There is no future for you in Europe.