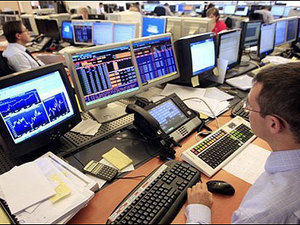 European stock markets slid and the euro steadied Tuesday after Eurozone finance ministers heaped pressure on Greece to prevent a debt default and following a positive bond auction for Spain.

Shares in French banks retreated sharply, with Societe Generale losing more than 5.0 percent, after Standard and Poor's downgraded most following its downgrade of France's sovereign rating.

"Markets are suffering from a little bit of profit-taking after yesterday's strength as we see the same old situation," said Simon Denham, head of Capital Spreads trading group.

"We've seen it all before where negotiations in Europe run on longer than expected as bondholders and ministers can't agree on a deal to reduce Greece's debts."

Banks involved in restructuring Greece's debt said Monday they had made their best offer and that it was now up to bailout providers to seal a deal.

Investors put in bids for 13.6 billion euros of bills, outstripping supply more than five times and allowing the Treasury easily to meet its goal of raising 1.5-2.5 billion euros, Bank of Spain figures showed.

Elsewhere, a key survey showed that private sector activity in the Eurozone rebounded to growth in January after four consecutive months of contraction, as Germany and France both expanded.

The flash reading of the purchasing managers' index (PMI), compiled by Markit research firm, for the eurozone jumped to 50.4 points from 48.3 points in December.

Any score in the survey of 4,500 manufacturing and services firms above 50 indicates growth, while a score below indicates contraction. The flash reading is based on about 85 percent of total replies.

"January's increase in the Eurozone composite PMI is certainly an encouraging sign, but the survey still suggests that the region is in recession," said Capital Economics analyst Ben May.

German industrial giant Siemens warned Tuesday that its bottom-line profits were down in the first three months of the current business year as customers delayed projects due to the debt crisis.

In reaction, its shares slumped 3.66 percent to trade at 75.51 euros in midday Frankfurt deals.