U.S. Sends Long-Range Bomber over Mideast in Show of Force 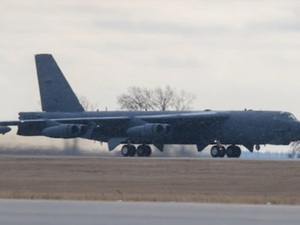 The U.S. has sent a long-range bomber on a short notice into the Middle East in a show of force that aims to “reassure U.S. partners and allies.”

“The non-stop mission demonstrates the U.S. military’s ability to deploy combat airpower anywhere in the world on short notice and integrate into CENTCOM operations to help preserve regional stability and security,” the statement added.

“The ability to quickly move forces into, out of and around the theater to seize, retain and exploit the initiative is key to deterring potential aggression. These missions help bomber aircrews gain familiarity with the region’s airspace and command and control functions and allow them to integrate with the theater’s U.S. and partner air assets, increasing the combined force’s overall readiness,” said Lt. Gen. Greg Guillot, 9th Air Force (Air Forces Central) commander.

During the mission, the bomber aircrews integrated with air operations centers and other AFCENT assets such as F-15E “Strike Eagles,” F-16 “Fighting Falcons,” KC-10 “Extenders” and KC-135 “Stratotankers,” the statement added.

“CENTCOM is committed to preserving and protecting the freedom of navigation and the free flow of commerce throughout the region. The United States does not seek conflict, but continues to be postured and committed to respond to any contingency around the world,” the statement said.

The last U.S. long-range bomber presence in the Middle East was in early 2020.

Just you wait evil USA, iran and hibi pigs are sending up their best drones as we speak in their show of force too!