Mourning after Deadly New IS Attack North of Iraqi Capital 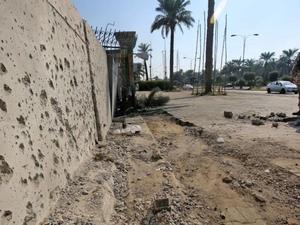 Iraq's Salahaddin province declared three days of mourning from Sunday over a deadly attack blamed on the Islamic State group, as some criticized authorities for failing to fight back jihadists.

Late Saturday, a roadside bomb hit a civilian car on an open road near Mt. Makhoul, about 200 kilometers (120 miles) north of Baghdad, police and a local official said.

When security forces arrived at the scene, jihadists opened fire on them, police said.

The attack killed at least six Iraqi security personnel and four civilians, including one who died of his wounds overnight, according to local medics.

There was no claim by IS, but both the local mayor and police blamed the group, which Iraq's government said in late 2017 it had defeated.

That victory came after three years of brutal fighting to wrench back the one-third of Iraqi territory that had been captured by IS.

Although the jihadists no longer hold territory, sleeper cells wage hit-and-run attacks on state infrastructure, particularly in desert areas north of the capital.

Two weeks ago, 11 people were killed in an IS attack on a lookout post at Al-Radwaniyah on Baghdad's outskirts, areas which are predominantly Sunni Muslim.

According to a study published this month by the International Centre for Counter-Terrorism in the Hague, the jihadist group has claimed more attacks in Iraq than in any other country where it is active over the period December 2018 to May this year.

The study said that IS activity in Iraq "accelerated precipitously from February 2020 onwards," reaching levels that are "worryingly close" to those preceding its sweep across a third of Iraq in 2014.

IS in Iraq "generally appears to be moving from a (re) building phase into one that is characterized by brazen guerrilla-style attacks," the study noted.

The attacks have coincided with a new campaign by Iraq's security forces to arrest jihadists hiding out in rugged terrain in the country's north and west.

In fact, just a day before the attack, the head of Iraq's federal police Jaafar al-Batat told state media that the area around Mt. Makhoul had been cleared.

"The incidents carried out by IS in some remote areas are isolated cases and now under control," he said.

"Iraqi security forces just assured us this area had been cleaned," wrote Mashaan al-Jaboury, a Sunni lawmaker representing Salahaddin, on Twitter after the violence late Saturday.

For Jamal al-Dhari, another Sunni figure writing on Twitter, the latest ambush "sheds light on the repeated failures in the fight against terrorism."

"The government of (Prime Minister) Mustafa al-Kadhemi must seriously put in place a national strategy... and stop being satisfied with 'investigative committees,'" said Dhari.

Iraqis regularly mock their government for establishing investigative bodies that do not produce results.

The tensions come as the US-led coalition, which helped Iraq fight IS starting in 2014, is drawing down its troops.

This year, the U.S. has already shrunk its contribution to the coalition from 5,200 to some 3,000 troops, as other countries have reduced their numbers as well.

The U.S. announced last week it would withdraw another 500 troops by mid-January, which Iraqi officials say is the fourth and final phase of the coalition's drawdown.

The top U.S. commander for the Middle East, General Kenneth McKenzie, said the progress made by Iraqi security forces in recent years had allowed the U.S. to draw down.

Troops remaining in Iraq would focus on training local forces, carrying out air strikes in support of their operations and running drone surveillance over the country.

The U.S. military presence remains a source of controversy.

Kadhemi, whose government is seen as U.S.-leaning, has slow-walked the implementation.

Pro-Iran factions have organized a series of rallies in recent months to demand Kadhemi implement the decision.

"If you don't leave on your own, our rockets will force you out!" one sign at a recent protest read.

It was in reference to dozens of rocket attacks on Western diplomatic and military installations since October 2019.

The U.S. has threatened to close its embassy in Baghdad unless rocket attacks stop.