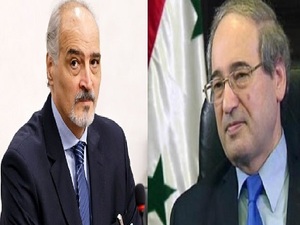 Mekdad will be replaced as deputy foreign minister by Syria's ambassador to the United Nations, Bashar Jaafari, the statement said.

Dang! says jaafar. he lives the good life in NY on very good salary. now he goes back to sewer. his grown daughters accustomed to parties in NY won’t like it. Typical axis of resistance mentality

mekdad, moalem.... does it really matter when its a dictatorship? Tow the line or get a bullet in your head who ever you are.