UK Supreme Court to Hear Case over 'IS Bride' Return 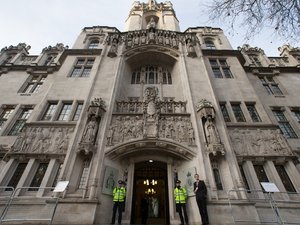 Britain's Supreme Court will on Monday hear the case of a woman stripped of her UK citizenship after joining the Islamic State in Syria, who wants to return to appeal the ruling.

The government in July won its bid to have the country's highest court consider whether Shamima Begum, 20, should be allowed to return to the UK to pursue an appeal over her revoked citizenship.

Earlier in July, three senior Court of Appeal judges ruled Begum should be allowed to come to Britain for the legal challenge.

But one judge said the Supreme court should consider the government's appeal because it raised "points of law of general public importance".

Begum was 15 when she and two other schoolgirls from Bethnal Green in east London left home to join the jihadist group on February 17, 2015.

She claims she married a Dutch convert soon after arriving in IS-held territory. She was discovered, nine months pregnant, in a Syrian refugee camp in February last year.

Her newborn baby died soon after she gave birth. Two of her other children also died under IS rule.

That prompted her to take legal action, arguing the decision was unlawful as it had made her stateless and exposed her to the risk of death or inhuman and degrading treatment.

British-born Begum is of Bangladeshi heritage. But Bangladesh's foreign minister has said he will not consider granting her citizenship.

Begum's high-profile flight with her friends from Britain to Syria via Turkey in 2015 was followed by an international manhunt. Her disappearance focused efforts to prevent disaffected British Muslims from leaving their homes to join IS.

Her discovery in Al Roj camp following the group's defeat in Syria and the subsequent months of legal wrangling over Begum's return has regularly prompted outcries in England's right-wing press.

While those opposing her admission to the United Kingdom have argued she is a security threat, groups calling for her to be allowed to return have said greater human rights principles are at stake and that Begum should answer for her crimes in Britain.