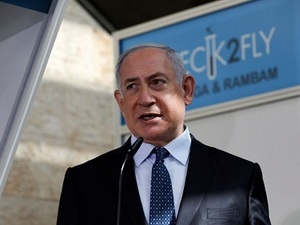 The reports fueled speculation that the Jewish state may be getting closer to normalizing ties with the biggest Gulf power after its historic US-brokered deals since September with the United Arab Emirates and Bahrain.

An Israeli government source who requested anonymity confirmed the reports to AFP.

Saudi Foreign Minister Prince Faisal bin Farhan then strongly denied the report which suggested Saudi Arabia was moving away from its decades-old stance of refusing dialogue with the Jewish state until the Palestinian conflict is resolved.

"I have seen press reports about a purported meeting between HRH the Crown Prince and Israeli officials during the recent visit by @SecPompeo," Prince Faisal tweeted.

"No such meeting occurred. The only officials present were American and Saudi."

Pompeo has confirmed he was in NEOM as part of a Middle East Tour and met with Prince Mohammed, who is widely known by his initials MBS. The U.S. State Department declined to confirm a three-way meeting.

Netanyahu, asked about the Saudi trip during a public meeting Monday of his Likud party, said: "Are you serious? I have never commented on these things and I do not intend to start now."

Israel's normalization deals with the UAE and Bahrain, known as the Abraham Accords, were brokered under U.S. President Donald Trump, who leaves office in less than two months.

Sudan has also agreed in principle to normalize ties with Israel.

A delegation from the Jewish state headed to Khartoum on Monday, the first since the deal was announced last month.

There has been speculation Washington may push for other Arab states to join the accords before President-elect Joe Biden is sworn in.

The Palestinians have condemned them and urged Arab states to hold firm until Israel ends its occupation of Palestinian territory and agrees to the creation of a Palestinian state.

Saudi Arabia -- a close U.S. ally and oil-rich buyer of military goods -- has publicly insisted it will stick to the decades-old Arab League position of not having ties with Israel until it reaches a peace deal with the Palestinians.

But some experts have said that Biden's upcoming inauguration may have created urgency in Riyadh, which has dealt discreetly with Israel over a joint desire to contain common foe Iran.

Prior to the Abraham Accords, Israel only had peace treaties with two Arab nations, its neighbors Egypt and Jordan.

But in late August, Netanyahu said Israel was holding "unpublicized meetings with Arab and Muslim leaders to normalize relations with the state of Israel", without naming any countries.

Amid speculation that smaller Arab states like Oman were also interested in a deal, Saudi Arabi has stood out as the key target for Israel, given the kingdom's wealth and influence.

Sunni Arab states and especially Israel worry that Biden may seek to revive the Iran nuclear deal agreed between Tehran and world powers during Barack Obama's presidency that was scrapped by Trump.

Under its deal with Israel, the Emiratis also secured rights to purchase advanced U.S. military hardware, something likely attractive to the Saudis, said Yoel Guzansky of Israel's Institute for National Security Studies think-tank.

Guzanky, a former national security aid to Netanyahu, said the Saudis were denying the talks to limit "damage in their (domestic) public opinion", but that Riyadh has plenty to gain from a US-brokered deal with Israel, including rights to purchase even more "sophisticated weapons."

Multiple Israeli analysts have said the Biden administration would face a backlash from the progressive left faction of his Democratic party if it pushed for an Israeli-Saudi peace deal without meaningful human rights commitments from Riyadh.

Speaking to AFP in the days after the November 3 election, Netanyahu's former envoy to Washington, Michael Oren, said it would likely not be "worth Biden's while to take on his party" over a Saudi-Israel pact.

Meanwhile Lebanon gets left behind as these gulf states build closer ties with Israel. Thank you Aoun, Berri and Hezbollah for ruining the country

Lebanon still has a chance to jump on the band wagon. Unfortunately for the country, we all know that President Aoun and Hizballah will sabotage every single possibility to reach agreements.
Look what they are trying to do just on the sea borders.

crimes against humanity? you mean like your hero assad the last 10 years. ?

I agree with everything you stated Bigjohn, the Arabs have done nothing to support the Palestinian cause and sold them out and could have made a deal with Israel and got something for the Palestinians. Now let's look at what Iran is doing to the minorities in Iran, like the Christians and the others, are they not doing the same thing as Israel? I hate to tel you this but Palestine has been ethnically cleansed and they have less than 20% of what they had in 1948. So good luck

Barbiranian what do you think khomeini is doing in Iran? Do you know how many innocent people are in prison or how the regime oppresses people? They are now so poor there they have to sell organs to eat. Focus on your own country Iran before worrying about the Palestinians

lol @ the independent leftist who is yet to comment

The only ones who still acre about "The Palestinian Cause" are your typical 60s type Arabists, Communists, and Socialists. The world has moved on.

can’t trust the israili. Meeting was supposed to be secret but a leftist newspaper spilled the beans to appease Bidiot of amir ka.

You must admit the tide is going against your posts. You post such absurd and ignorant comments, I think you are really a Zionist intending to attract co-Zionists to respond.