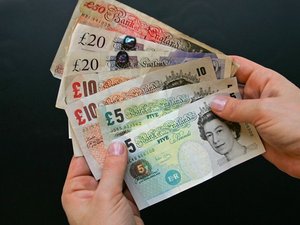 Britain's state borrowing fell by more than expected last month but not by enough to prevent its net debt from reaching a record high £1.0 trillion ($1.55 trillion), official data showed Tuesday.

Public sector net borrowing excluding the government's interventions in the financial sector hit £13.7 billion in December, the Office for National Statistics (ONS) said in a statement.

That undershot market expectations for £14.9 billion, according to analysts polled by Dow Jones Newswires, and compared with net borrowing of £15.9 billion in December 2010.

Net borrowing fell as the government's taxation revenues increased at a faster pace than expenditure, according to the ONS.

However the data showed net debt excluding the temporary effects of financial interventions hit £1.0 trillion in December and public sector net debt as a percentage of gross domestic product (GDP) rose to 64.2 percent, both the highest levels since comparable records began in 1993.

The coalition government admitted in November that Britain would have to borrow more amid weaker-than-expected economic growth.

The government has forecast public sector net borrowing to hit £127 billion, or 8.4 percent of GDP, in the financial year ending in April.

Analysts said the latest data pointed to the government undershooting the deficit target.

But net debt breaching £1.0 trillion for the first time was "a reminder of the enormity of the challenge that still lies ahead to get the public finances back on a sustainable footing," said Vicky Redwood, senior economist at Capital Economics research group.

Although not a member of the Eurozone, Britain is a key trading partner of the single-currency area and it is bound by the EU limits on public deficits and debt.