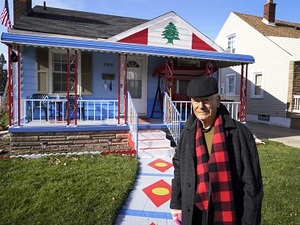 When Manal Saab heard that a massive explosion had struck Beirut, she grabbed her phone, frantically trying to reach loved ones there.

The news she received was good: Her mother-in-law and sister-in-law, both of whom live not far from the Lebanese capital's port that was devastated by the Aug. 4 blast, were vacationing at the time.

"Otherwise, they wouldn't have survived it," said Saab, an American citizen who lives in Fenton, Michigan, near Flint, but was born in Lebanon.

Knowing that her family and friends were safe, a feeling of relief washed over Saab.

That changed quickly, though. And her focus turned to a different kind of relief.

Within a few days, she and her daughter, Rashal Baz Zureikat, a lawyer, had created the Lebanon Relief Project and were starting to solicit contributions from across the U.S.

Santa Barbara, California-based humanitarian aid organization Direct Relief has sent more than $20 million in medicine, personal protective equipment and supplies to Beirut. More than half of that amount was delivered via a FedEx-donated airlift that also included relief supplies from the American Task Force on Lebanon and the Lebanon Relief Project.

"People were just waiting to help. They just wanted something to immediately give to, they wanted all that pain to basically get out and give something positive," Saab said. "They wanted to turn all that negative energy into something that will give them some satisfaction that they're able to reach Lebanon somehow."

The massive blast killed nearly 200 people and injured more than 6,000 when 3,000 tons of ammonium nitrate detonated at Beirut's port. It also devastated several neighborhoods, shattering thousands of residential, historic and other buildings. It is considered to be one of the largest non-nuclear explosions ever recorded.

The cause of the explosion still is not known, but it is widely seen as the culmination of decades of corruption and mismanagement by Lebanon's ruling class. It came on top of an unprecedented economic crisis. Poverty and unemployment are soaring, made worse by the coronavirus pandemic. And the medical community was left reeling as it continues to navigate and keep up with the explosion's devastating long-term effects.

The dire situation in a nation once known as a regional hub for banking, real estate and medical services has drawn intense interest in Michigan, which is home to one of the largest concentrations of Arabs outside the Middle East.

U.S. Rep. Rashida Tlaib raised "a significant amount of money" via an email campaign, said the Detroit Democrat, who added that she even knew of a girl who brought in some cash for the people of Beirut earned through a lemonade stand.

"Even if you are not Lebanese, just being an Arab American … I felt the connection in a big way to what happened and the need to help," said Maha Freij, director of the Dearborn-based Center for Arab American Philanthropy.

CAAP has partnered with the ATFL/Lebanon Relief Project in fundraising to support the expense of logistics and shipments.

Everyone involved in relief efforts says more needs to be done to assist Lebanon because, as Saab points out, the situation has gone "from bad to worse," due to a COVID-19 surge and strained resources in the aftermath of the explosion.