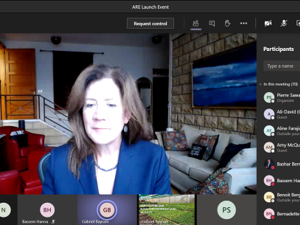 The United States Agency for International Development (USAID) has launched its newest assistance activity in Lebanon, the Agriculture and Rural Empowerment (ARE) activity during a virtual event.

The event was held in the presence of U.S. Ambassador to Lebanon Dorothy Shea and USAID/Lebanon Mission Director Mary Eileen Devitt, and attended by representatives from agricultural and agri-food industries, small- and medium-sized enterprises, governmental organizations, universities, local and international development groups, and other donors.

The $57 million, multi-year activity is designed to develop rural economies in Lebanon through support to the agri-food sector and other industries in order to unlock local and export sales potential, while also creating jobs and increasing farmers' and workers' incomes. ARE will work throughout Lebanon with the following objectives: increase domestic and export sales, increase access to financial resources, and improve productivity of micro, small, and medium enterprises.

In her remarks, Ambassador Shea stated: “This new activity is a stellar example of the U.S. Government's continuous support for Lebanon's highly productive sector -- agri-food -- by tapping into Lebanon's key economic growth driver -- the private sector."

The ARE Chief of Party Brian King noted: "We are excited to launch the Agriculture and Rural Empowerment activity today and begin our support to private-sector led development of Lebanon’s agri-food sector and rural industries, improving firm and sector-level competitiveness at this critical juncture in Lebanon's journey to self-reliance."

The event featured the announcement of the first Annual Program Statement, soliciting concept notes from potential Champion Firms, which will be open for twelve months and will lead to Partnership Framework Agreements between ARE and the Champion Firms to develop the sector.

Hey Hezbo thugs, get on you bikes and hit Beirut and let's hear it for Shea Shea Shea

God bless trump but also before leaving office we do not need more American rice but rather f35 to protect Lebanon AFTER mr trump wipes out Hezbollah and Iran.

Shea and Devitt deliver Christmas baskets from B-52s. In Vietnam, AID was a big part of the "counter-insurgency", which is to say, the US effort at keeping the 80% of Vietnamese who wanted Ho Chi Minh and not pro-French collaborators running the country under lock and key. Many Lebanese,possibly as many as half a dozen, look back fondly at the good old days in Algeria and Vietnam. Eisenhower wrote in his 1963 Mandate for Change that the CIA told him this was the percentage that would vote for Ho if the 1954 referendum were held. It was not held.
As the B-52 nears the end of its service life, young voices at USAID speak of using Tomahawk cruise missiles to deliver the Christmas baskets. Each missile has a two-thousand-pound gift payload.