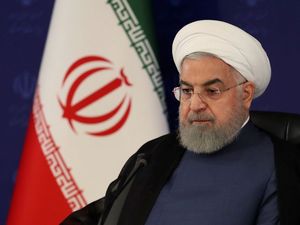 Hassan Rouhani said that if Iran and the U.S. could find a path back to "the situation on Jan 20, 2017," President Donald Trump's inauguration day, "it could be a huge solution for many issues and problems."

Under Trump, tensions between the U.S. and Iran have escalated, pushing the two sides to the brink of war earlier this year.

One of Trump's signature foreign policy moves was unilaterally withdrawing from the nuclear accord in 2018, which had limited Iran's uranium enrichment in exchange for lifting economic sanctions. Trump has since piled punishing sanctions on Iran that have devastated the country's economy and crashed its currency.

Rouhani called on Biden to "explicitly condemn" Trump's maximum pressure campaign as well as "compensate for wrong policies pursued over the past four years," a possible reference to the massive financial losses Iran suffered as a result of Trump's sanctions campaign.

In an effort to pressure Europe to find a way around the sanctions, Iran has gradually abandoned the limits of the nuclear deal. Iran's enriched uranium stockpile, which would have been under 300 kilograms (660 pounds) in the deal, now stands at over 2,440 kilograms (5,380 pounds), according to the latest report by U.N. inspectors.

Rouhani, a relative moderate, along with Iran's foreign minister, have signaled the country's willingness to roll back its enrichment and return to negotiations.

Although Biden appears unlikely to lift crippling sanctions on Iran in his "first steps" in office, as Rouhani demanded in his Wednesday speech, the president-elect has indicated he would return to the nuclear deal if Iran first comes back into compliance.

In your dreams you retarded murderer