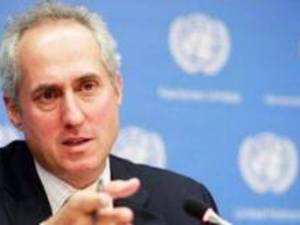 The United Nations is "very concerned" over reports of the arrests in Egypt of human rights activists, the world body's spokesman said.

Stephane Dujarric made special mention of the arrest of three members of the Egyptian Initiative for Personal Rights (EIPR).

"We're very concerned about these reports of arrests and treatment of these human rights defenders," Dujarric said at the UN's daily press briefing.

"There should be no prisoners of conscience in the 21st Century. No one should be arrested for having a political opinion," he said.

Amnesty International said on November 20 that three senior EIPR staff members -- including the executive director Gasser Abdel-Razek -- were "arbitrarily" arrested days after meeting with Western ambassadors and other diplomats who visited their Cairo office.

"This is an unprecedented crackdown on the human rights community and could well go beyond EIPR to engulf the few other remaining brave groups," Amnesty's Philip Luther said.

Several European countries, the United States and United Nations have condemned the detention of the EIPR members.

Egypt's foreign ministry spokesman Ahmed Hafez on Saturday dismissed the international criticism, saying in a statement that the three staffers were detained on charges that include "joining a terror group" and "spreading false news."

The trio has been placed in pre-trial detention for 15 days -- which under Egyptian law can be extended and last up to two years.

According to rights groups there are some 60,000 political prisoners in Egypt.

These include secular activists, journalists, lawyers, academics and Islamists arrested in an ongoing, sweeping crackdown on dissent under President Abdel-Fattah al-Sisi.