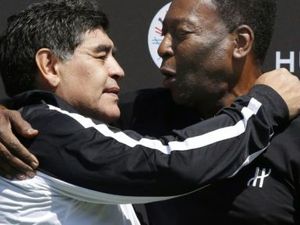 Brazilian great Pele led global tributes to Diego Maradona, whose death was announced on Wednesday, saying one day they would "play soccer together in the sky."

Renowned for inspiring Argentina to World Cup glory in 1986, Maradona was most loved at club level for his spells with Boca Juniors in his homeland and Napoli in Italy, where he won the club's only two Serie A titles.

Maradona is remembered for his masterly skill with the ball, but he was also famous for his frequent lack of control on and off the field.

He struggled with addiction, notably to cocaine, and with his weight, in contrast to the more clean-cut image of three-time World Cup winner Pele.

"Sad news today. I have lost a dear friend, and the world has lost a legend," Pele wrote on Instagram, alongside a picture of Maradona hoisting the World Cup trophy in 1986.

"There is much more to say, but for now may God give his family strength. One day, I hope, we will play soccer together in the sky."

The pinnacle of Maradona's playing career came in the 1986 World Cup quarter-final in Mexico City, where his two iconic goals, which reflected his larger-than-life character, condemned England to a 2-1 defeat.

For the first he punched the ball into the net for a goal he named the "Hand of God", while for the second he showed incredible skill by dancing round the England team from inside his own half.

"By some distance the best player of my generation and arguably the greatest of all time," said Gary Lineker, who scored England's goal in that match.

"After a blessed but troubled life, hopefully he'll finally find some comfort in the hands of God. #RipDiego."

Maradona went on to have a far less successful coaching career, most notably leading Argentina at the 2010 World Cup, where a side containing Lionel Messi exited at the quarter-finals in a crushing 4-0 defeat to Germany.

Messi has enjoyed even greater collective and individual accolades at club level for Barcelona than Maradona, but has failed to match his success with the national team.

"It is a very sad day for all Argentines and football," said Messi on social media alongside photos of him with Maradona. "He leaves us but he does not go because he is eternal.

"I am left with many of the nice moments we shared and I want to send my condolences to all his family and friends."

Shirts and flags with Maradona's name and face still adorn Napoli's San Paolo stadium on matchdays in memory of the part he played in the southern Italian club's most successful era.

"The world awaits our words but there are no words to describe the pain we're going through. Now is the time to grieve," Napoli said on Twitter.

Maradona also played for Barcelona and Sevilla in Spain and Argentinos Juniors and Newell's Old Boys in Argentina.

"Thank you for everything Diego. FC Barcelona expresses its deepest condolences regarding the death of Diego Armando Maradona, a player for our club (1982-84) and an icon of world football," Barcelona said in a statement.

Sevilla said: "A hero for an entire country and for football itself. One of the greatest players to have graced the game and we were lucky enough to enjoy you at Sevilla FC. Diego Armando Maradona, forever eternal. Rest in peace."

A minute's silence will be held before all of Wednesday's Champions League matches.

Maradona proved an inspiration even to the current generation of football stars who were not old enough to see him play live.

"Today I say goodbye to a friend and the world says goodbye to an eternal genius," tweeted five-time Ballon d'Or winner Cristiano Ronaldo.

"One of the best ever. An unparalleled magician. He leaves too soon, but leaves a legacy without limits and a void that will never be filled.

"Rest in peace, ace. You will never be forgotten."

How sad... he was my idol growing up as a kid in the alleyways and slums of Buenos Aires. He taught me everything I know about soccer. R.I.P