Maradona in His Own Words and the Words of Others 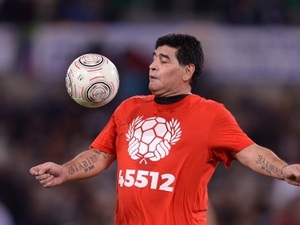 Diego Maradona, who died on Wednesday at the age of 60, will forever be remembered as one of the greatest footballers of all time but also one of the most controversial.

Here, AFP Sport looks at some of the best quotes on Maradona both from the man himself and from others in football:

- Maradona in his own words -

- "To see the ball, to run after it, makes me the happiest man in the world."

- "I am Maradona, who makes goals, who makes mistakes. I can take it all, I have shoulders big enough to fight with everybody."

- "You can say a lot of things about me, but you can never say I don't take risks."

- "When I wear the national team shirt, its sole contact with my skin makes it stand on an end."

- "I hate everything that comes from the United States. I hate it with all my strength."

- "Suck it, and keep sucking it!"  -- To journalists who had doubted him as Argentina coach.

- "There would be no debate about who was the best footballer the world had ever seen, me or Pele. Everyone would say me."

- "Pele should go back to the museum."

- "I was waiting for my teammates to embrace me and no one came... I told them, 'Come hug me or the referee isn't going to allow it'."

- "If I could apologize and go back and change history I would do. But the goal is still a goal, Argentina became world champions and I was the best player in the world."

- Maradona in the words of others -

-- "Even if I played for a million years, I'd never come close to Maradona. Not that I'd want to anyway. He's the greatest there's ever been." -- Lionel Messi.

-- "No ball ever had a better experience than when it was at his left foot." -- Argentina teammate Jorge Valdano.

-- "The best of the lot, no question... I saw Maradona do things that God himself would doubt were possible." -- Former Brazil star Zico.

-- "The best I ever played against was Maradona." -- Former AC Milan and Italy defender Paolo Maldini.

-- "He was a model of good behavior on the pitch. He was respectful of everyone, from the great players down to the ordinary team member. He was always getting kicked around and he never complained, not like some of today's strikers." -- Maldini.

-- "Maradona. When he was on form, there was almost no way of stopping him." -- Former AC Milan and Italy defender Franco Baresi, when asked who was the best player he faced.

-- "Maradona is a God to the people of Naples. Maradona changed history. In 80 years, we had always suffered, fighting against relegation, yet in seven seasons with him we won two leagues, a UEFA Cup, two Italian Cups. I'm a fan too and to live those years with Maradona was incredible." -- Naples native Fabio Cannavaro, who was in the youth ranks at Napoli when Maradona was there and later won the World Cup with Italy in 2006.

-- "The best player there has ever been, better than Pele." -- Ruud Gullit.

-- "When Diego scored that second goal against us, I felt like applauding. I'd never felt like that before, but it's true... It was impossible to score such a beautiful goal. He's the greatest player of all time, by a long way." -- England's Gary Lineker remembers the 1986 World Cup quarter-final.

-- "For Maradona to win a World Cup on his own, and let's face it, that's what he did as the rest of the team were ordinary, was an amazing achievement. He was the best player I've seen." -- England's Glenn Hoddle.

-- "The crucial difference with Pele is that Maradona wasn't surrounded by great players; he had to carry the team himself. If you took Maradona out of Argentina, they would not win the World Cup, but I think Brazil without Pele would still have won." -- Eric Cantona.

-- "He only wanted the ball. He wasn't about running; he was all about the game... It's difficult to explain exactly what he would do from the noise the ball would make when his foot connected with it to his incredible control and the swerve he could put on it." -- former teammate Mauricio Pochettino.

-- "Diego, what planet are you from?" -- Argentine television commentator Victor Hugo Morales immediately after the Goal of the Century against England in 1986.