Asia Markets Ease Back as Investors Take Breath after Rally 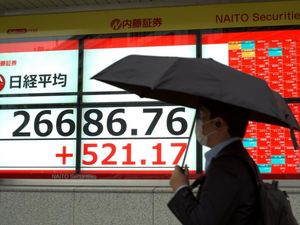 Asian markets drifted Friday as investors took their feet off the pedal after rallying for the past month on vaccine optimism and easing US political uncertainty.

Hopes are high that with at least three inoculations close to being rolled out, life can begin to get back to normal next year and give a much-needed boost to the battered global economy.

News of the vaccine successes have sent stocks powering higher, led by airlines and other tourism-linked companies.

But the rally has been kept in check by a frightening surge in virus infections across the United States and Europe, with some other countries including Japan and South Korea now seeing spikes.

There are also worries about a further acceleration in the US after millions ignored official advice and travelled across the country to celebrate Thanksgiving, with top infectious disease expert Anthony Fauci saying he expected to see "a surge superimposed upon a surge" after the holiday.

The increase in new cases has forced governments to reimpose lockdowns and other economically painful containment measures that have raised concerns about the already stuttering recovery.

With US markets closed Thursday for the Thanksgiving holiday, Asian markets were subdued going into the weekend.

Hong Kong fell after five days of gains, while there were also losses in Singapore, Seoul, Wellington, Taipei and Manila. Sydney dropped 0.7 percent after China said it would impose anti-dumping measures on Australian wine, in a further ramping up of tensions between the two countries.

Investors were also given a slight jolt after British pharma giant AstraZeneca said its vaccine, one of the three preparing to be authorised, needed further research after questions emerged over how much protection it offers.

But US scientists said the higher rate came during tests in people aged 55 and under.

The head of the Oxford Vaccine Group has said further evidence will be available next month, but added that the result was still "highly significant".

The additional trial was not likely to delay regulatory approval in Britain and the European Union, AstraZeneca said.