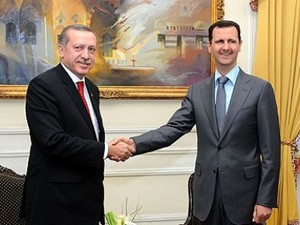 Erdogan was in Syria to take part in a landmark ceremony for a joint "Friendship Dam" to be built over the Orontes river at the border between the two countries.

"The two sides also discussed the latest developments in the regional and international arenas, particularly the situation in Egypt," said a statement issued after the two men's meeting in the city of Aleppo.