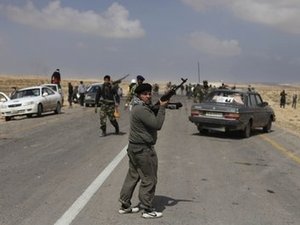 Libya's interim government met on Tuesday to discuss the deadly clashes in the former regime's bastion of Bani Walid as sources said calm returned to the town.

"The government is in a meeting to discuss the issue of Bani Walid," a source in the administration of Prime Minister Abdul Rahim al-Kib told Agence France Presse.

Five people were killed Monday in gunfighting in Bani Walid, 170 kilometers south of Tripoli, with Interior Minister Fawzi Abdelali denying claims by local officials that the town was attacked by supporters of slain strongman Moammar Gadhafi.

Abdelali said the clashes erupted due to "internal problems" in Bani Walid.

An AFP correspondent who managed to enter Bani Walid for a short time Monday said thick smoke billowed into the sky, while the identity of those present there was unclear and there was limited evidence of the new Libyan authorities on the roads outside the town.

Abdelali told Libyan television late Monday that the fighting was linked to "the issue of compensation for those affected by last year's war."

"The information we have from inside the city does not say that there are green flags (hoisted on town buildings) and there is nothing in relation to the former regime," referring to claims made by several other local officials.

Colonel Salem al-Ouaer, a tribal leader from Bani Walid told AFP that calm was returning to the town on Tuesday.

"The situation is under control and calm is returning" in the town, he said.

Ouaer said that representatives of local tribes were holding a meeting to discuss the issue outside Bani Walid with a delegation of tribes from the nearby towns of Zintan and Sabratha.

He said local sheikhs of Bani Walid were also meeting at a mosque in the town.

"What happened yesterday was purely a local conflict," Ouaer said, indicating that the firefight was not caused by supporters of Gadhafi as claimed by other officials on Monday.

He said passage was also secured for those holed up on a former rebel base that was surrounded Monday by what officials claimed were supporters of Gadhafi.

Ouaer said he was in touch with the chief of the ruling National Transitional Council, Mustafa Abdul Jalil, and Defense Minister Osama Juili to "update them of the situation in Bani Walid."

Bani Walid was one of the last pro-Gadhafi bastions to fall in the bloody uprising against the veteran ruler.

Its capture was followed days later by the fall of his hometown Sirte in a battle which also led to Gadhafi’s killing and marked the "liberation" of Libya.

Monday's firefight follows an outburst of opposition to the NTC in the eastern city of Benghazi last week that prompted council chairman Abdul Jalil to warn of possible "civil war" in post-conflict Libya.