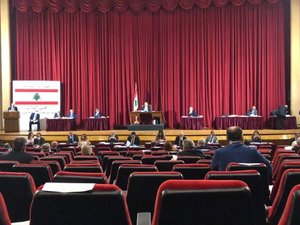 Parliament on Friday approved a recommendation calling for subjecting the central bank and all state institutions to a forensic audit without regard to bank secrecy, in response to a letter from President Michel Aoun.

“All the accounts of Banque du Liban, ministries, independent authorities, councils, financial institutions, funds and municipalities should be subjected to an audit without any obstacle and without using banking secrecy or other issues as an excuse,” parliament’s recommendation said.

It will decide "the course of the country," he said.

"The President's letter has come at the right time and to the right place. Today we have sensed unanimity from all blocs that the audit should be comprehensive and complete," Berri added.

"Let us seize the chance and prove to all Lebanese and to the entire world that we are really serious in approaching this file," he went on to say.

"Accordingly, there is no need for some remarks which some speeches are mentioning about the past or the responses to remarks said outside parliament a week or two weeks ago," Berri added, in response to some MPs' remarks during the session.

"This debate session is dedicated to MPs and ministers are not entitled to speak," Berri said.

Speaking after the session, MP Ali Hassan Khalil of Berri's bloc said the recommendation "highlights our insistence on auditing all of the state's accounts."

"The decision has entered into force and it must be fulfilled in order to pinpoint responsibilities. It creates a new approach for cooperating with the state and no one should enjoy a cover," he added.

MP Hadi Abu al-Hosn had earlier announced that the Democratic Gathering bloc supports an audit of the accounts of BDL and all state institutions but without any "selectivity" or "political vendettas."

"We have the right to ask: what is this sudden awakening after we already collapsed... What is this belated awakening after four years of turning a blind eye and covering for violations? It is our right to ask, at a time we have not seen this chivalry when it comes to controlling the waste of public funds in the electricity, customs and telecommunication files," the MP added.

The International Monetary Fund and France are among creditors demanding an audit of Lebanon's central bank as part of urgent reforms to unlock financial support, as the country faces a grinding economic crisis.

But the central bank has claimed that provisions including Lebanon's Banking Secrecy Law prevent it from releasing some of the necessary information, a charge the justice ministry and legal experts have disputed.

Alvarez & Marsal scrapped its agreement with the government last week, saying the central bank had failed to hand over the required information.

The country, which defaulted on its debt this year, is experiencing its worst economic crisis in decades and is still reeling from a devastating explosion at the port that gutted entire neighborhoods of Beirut on August 4.

Both are widely blamed on government corruption and incompetence.

Lebanon is in desperate need of donor funds and talks with the IMF have been on hold since July pending reforms.

"You didn't need the lifting of bank secrecy or anything to conduct the" audit, he said.

"The problem is again, how do you allow thieves to audit thieves?" he added, referring to authorities.

The forensic audit of the Banque du Liban (BDL) is one of the main points of the government's economic rescue plan, approved at the end of April.

Several officials, including the finance minister, have said the government is expected to replace Alvarez & Marsal with another consultancy firm soon.

"Let us seize the chance and prove to all Lebanese and to the entire world that we are really serious in approaching this file," he went on to say.
All of them warlords criminals, but this one is mentally sick, he should be in a mental hospital! and he is the speaker.....meaning? the majority of the MP's voted for him! meaning? either they are corrupt or mentally sick.