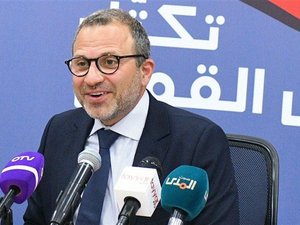 Free Patriotic Movement chief Jebran Bassil said Friday that the Lebanese people have “triumphed” thanks to President Michel Aoun, after parliament approved a decision calling for a forensic audit of the accounts of the central bank and all state institutions.

“The auditing firm should immediately return to its task and should receive what it has requested and the government should seek a forensic audit of all state administrations, institutions and funds,” Bassil tweeted.

“The Lebanese people triumphed today thanks to their president and achieved a step forward towards recovering a part of their rights,” he added.

The head of the Democratic Gathering bloc MP Taymour Jumblat meanwhile tweeted that parliament has “defeated some parties’ bravados and deceitful slogans,” in an apparent jab at Aoun and Bassil.

“Let their be a financial audit of all public spending and of all institutions and administrations and let the results be referred to an independent judiciary whose appointments are not stalled, so that we get to know who is keen on the rights of the Lebanese,” Jumblat added.

In a letter to parliament, Aoun had urged lawmakers to “cooperate with the executive authority to enable the state to conduct a forensic audit of Banque du Liban’s accounts.”

“This audit, with all its international standards, should apply to all of the state’s administrations to achieve the needed reform and implement the aid programs which Lebanon needs in its current and suffocating situation,” the president added.

He warned that failure to carry out the forensic audit might turn Lebanon into a “rogue or failed state” in the eyes of the international community.

It Stinks, what’s the catch? Will they be ‘auditing’ themselves? Lmao

"constantine 1 hour ago
Without the FPM at the helm there would be no Lebanon.
Lebanon would be a province of ISIS reporting to Riadh.
The reason why Minister Bassil is being subjected to harsh criticism by thieves and traitors to stop him from taking their riches and beating them in the national treasury."

libanaisresilient 13 hours ago
OMG another big step towards the Presidency! Long live Bassil! You're the Man!

constantine 7 hours ago
The voice of justice.

How in the world is this a triumph and attributed to Aoun?

I'm yet to see a photo of this guy where he doesn't look like a clown. Is this his resting face or is there a smart arse photographer taking these pictures

What has been agreed in Parliament is nothing short of a joke. It is a non-binding recommendation and not a law.

Thieves auditing themselves... What a joke... And this clown hails it a victory... Could he be any stupider?

President Aoun is one of the honest presidents in the whole world. Do not underestimate this man. He will knock all the gang . Wait and see