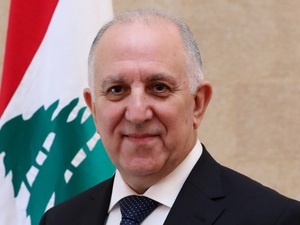 The Higher Judicial Council announced Friday that it will ask the state prosecutor to “take the appropriate legal measure against the interior minister” over his latest remarks about the judiciary.

In a statement issued after an extraordinary meeting, the Council said it has taken its decision in agreement with the heads of the Shura Council and the Audit Bureau.

In a live interview on MTV, Fahmi had claimed that “95% of judges are corrupt.”

Fahmi had claimed that “95% of judges are corrupt.”

He is 100% correct and spot on. Every Lebanese who has had any dealings with the courts in Lebanon ( myself included ) agrees with Minister Fahmi.

He also told of a story during the lockdown: Miss Lebanon was holding a party in a villa in total disregard to the lockdown rules and social distancing. A unit from the ISF went to her house and asked the party to disperse. half an hour later 'Judge' Ghada Aoun (who else!) summoned the ISF unit and inquired from them as to why they stopped the party!

Minister Mohammed Fahmi is right on.. They are all corrupt. How can anyone not see it.

I respect him because he has spoken the truth! I have been caught in the system and have won after twenty years of my life with the corruption and fraud of the judges !! The elite classes don’t like hearing the truth ! The people are dying of hunger and no judge or minister cares ! The judges should go after the corruption not against a man that has told the truth !!

Yes, they are corrupt just like the political mafia that appointed them. They serve their masters and not justice.

He is a like a Forrest Gump character---not the brightest tool in the shed, but is pretty blunt about what he sees and feels. And if it is indeed true, why not check the logs of Ghada Aoun's telephone(s) and see if she did indeed make such a phone call.

fact is that in each country or race you have a group of intelligent and civilised people , and another group of naive, corrupt, criminal , ideology driven, untrustworthy etc...Also in Lebanon you can identify these 2 groups of people, mind you , you have to look hard to find the first one

Finally a man with guts speaks about corruptions. Is there anything in Lebanon without 95% corruption? I doubt there is. I am only surprised that Lebanon was not listed as the most corrupt country in the world.