Toll Rises to Six in Clashes among Rival Iraq Protesters 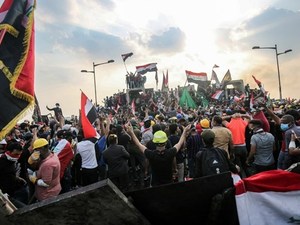 Violence erupted on Friday between the dwindling members of the October 2019 anti-government protest movement and supporters of populist Shiite cleric Moqtada Sadr, who had called on his followers to hit the streets in a show of force.

In the southern city of Nasiriyah, anti-government activists accused Sadrists of shooting at them and torching their tents in their main gathering place of Habboubi Square.

Clashes continued into the night, with medics reporting a total of six dead by Saturday morning, five of them from bullet wounds, and at least 60 wounded.

But on Saturday morning, anti-government protesters were already back in the square to rebuild their camp, an AFP reporter there said.

Authorities sacked the city's police chief, launched an investigation into the events and imposed an overnight curfew in Nasiriyah.

Nasiriyah was a major hub for the protest movement that erupted in October 2019 against a government seen by demonstrators as corrupt, inept and beholden to neighbouring Iran.

It was also the site of one of the bloodiest incidents of the uprising, when more than three dozen died in protest-related violence on November 28 last year.

The deaths sparked outrage across Iraq and prompted the resignation of then-prime minister Adel Abdel Mahdi.

His successor, Mustafa al-Kadhemi, has sought to reach out to protesters and set June 2021 as a date for early elections -- a major demand of the youth-dominated movement.