All Blacks Pay Tribute to Maradona ahead of Pumas Game 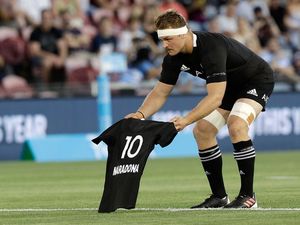 New Zealand captain Sam Cane laid an All Blacks No.10 jersey emblazoned with Diego Maradona's name in the centre circle ahead of their match against Argentina in memory of the football legend Saturday.

The 1986 World Cup winner, a rugby fan, died in his sleep on Wednesday aged just 60, plunging his South American homeland and football globally into mourning.

Both teams gathered in the middle at McDonald Jones Stadium in Newcastle, north of Sydney, ahead of their Tri Nations clash for the tribute.

It saw Cane symbolically place the shirt on the ground as a mark of respect ahead of their traditional haka.

There were suggestions that the 10 shirt of the Pumas' Nicolas Sanchez could be retired for the game in honour of Maradona, who wore that number when playing for Argentina.

But he donned it as normal.

"I think he's a legend for everybody, but in Argentina he was almost a god," Pumas coach Mario Ledesma, who played 84 times for his country, said shortly before kick-off.

"He had the capacity of getting everybody together so we will miss him."

Maradona was a huge fan of any Argentine sporting team, and Ledesma met him several times.

"He came to many games, and he came once to our changing room after a game against the All Blacks in La Plata; we'd lost on the last ball," he said on Thursday.

"I crossed paths a couple of times, but not many. He had an attraction, the world stopped when he was there.

"He would watch tennis, hockey, rugby, football, whenever there was an Argentina jersey he was there and he was an example of how to represent that jersey."

Maradona was laid to rest on the outskirts of Buenos Aires after a ceremony attended by family and close friends, following a chaotic public wake.