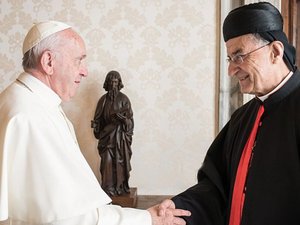 Maronite Patriarch Beshara al-Rahi has held an “important and noteworthy meeting in form and content” with Pope Francis in the Vatican, An-Nahar newspaper reported on Sunday.

Al-Rahi traveled to the Vatican specifically to meet with the pontiff, which gives the one-hour meeting that was held Saturday “extraordinary indications,” the daily said.

Al-Rahi warned that Lebanon and its people, especially Christians, are facing an “existential danger,” the daily said.

“The level of fear of hunger and the ambition to emigrate are surging in the minds and hearts of the Lebanese, who now fear for the future of their children,” the patriarch reportedly told the pope, pointing out that “a quick rescue operation is necessary to pull Lebanon out of its crisis before it’s too late.”

Al-Rahi also urged the pontiff to “play a role in this rescue process in order to preserve Lebanon’s unity as a model for coexistence through the Vatican’s international relations.”

“Lebanon aspires to be a unified state that is strong through its people, army and institutions, and this can happen through positive neutrality whose plan has become ready and feasible should there be domestic consensus over it,” the patriarch told the pope.

He also invited the pontiff to visit Lebanon.

An-Nahar said al-Rahi is expected to return to Lebanon on Sunday.

God bless Shia approved and loved Maronite Patriarch Beshara al-Rahi for holding an important and noteworthy meeting in form and content with Pope Francis in the Vatican.

Sadly, everything you said about rahi is true. You forgot to mention how he applauded assad when he was gasing his people.

Best politician dressed in a gown, ever!

The biggest lie ever! Religious coexistence model?? what kind of statement is this ? because of their religious fanaticism Lebanese are in permanent civil war; militias are the product of this artificial coexistence, and these( including Sunni,Shia,Druze) religious leaders with their statements and preaching are the creators of the fanaticism.

Well said Kazan, I fully agree with your truthful remark...

I believe al Rahi has described the 50-50 split of the Chamber of Deputies between Christians and Muslims per Article 24 of the Constitution as "equality".

Al-Rahi also urged the Pope to "play a role in this rescue process to maintain Lebanon's unity as a model for coexistence through the Vatican's international relations."
This man lives in the 17th century, the Inquisition, the papal power and influence and the Popes Wars Protestant Catholics are history, religions in politics brought a lot of misery in the past centuries.doesn't he understand that Europeans do not want that Religion interferes with politics ? the problem with third world countries (Latin America, Africa, Middle East), keep worshiping your religious leaders, you're instrumental to their continued prosperity and your misery,