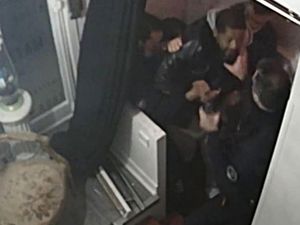 Four police officers detained after a video appeared to show them beating a black music producer in Paris were brought before a judge on Sunday, a source close to the investigation said.

The source said the officers faced the judge around noon, just a day after mass demonstrations throughout France opposing police violence and the government's new legislation restricting sharing images of officers.

The four officers, who have been suspended from duty and being held by the National Police Inspectorate General (IGPN), are under investigation for "violence with a racist motive" and false testimony.

President Emmanuel Macron said the images of the beating of music producer Michel Zecler by police officers in Paris last weekend "shame us". The incident has magnified concerns about alleged systemic racism in the police force.

Commentators say that the images of the officers -- first published by the Loopsider news site -- may never have been made public if the contentious Article 24 of the security legislation was made law.

The article would criminalize the publication of images of on-duty police officers with the intent of harming their "physical or psychological integrity". It was passed by the National Assembly although it is awaiting Senate approval.

Violent clashes erupted in Paris on Saturday as protesters vented their anger against the security bill.

Some 46,000 people marched in the French capital and 133,000 in total nationwide in the protests on Sunday, the interior ministry said.