Belarus Protesters Take to the Streets with New Tactic 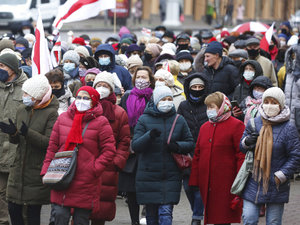 Opposition protesters in Belarus took to the streets of capital Minsk Sunday in the latest of three months of demonstrations against the re-election of strongman president Alexander Lukashenko.

Since an August election, Belarus has been gripped by massive protests that erupted after Lukashenko, 66, secured a sixth term as president of the ex-Soviet republic.

The opposition believes the election was rigged and political novice Svetlana Tikhanovskaya -- who ran against Lukashenko in the place of her jailed husband -- was the true winner of the polls.

In recent weeks, authorities imposed an intense crackdown in which hundreds were detained and protesters were prevented from gathering in central Minsk.

That prompted Lukashenko's opponents to change tactic, calling on supporters to create small gatherings in every district of the capital.

According to local media, some twenty rallies were recorded on Sunday across the city.

"Large columns of people have assembled in all districts of Minsk, without exception. The Lukashenko police are desperately rushing from district to district," said opposition Telegram channel Nexta Live that has helped coordinate the ongoing demonstrations.

As in previous weeks, several metro stations in the city center were shut and mobile connection was limited.

Riot police were deployed in large numbers, with the Tut.by news website reporting the use of stun grenades and tear gas.

Human rights group Viasna said that at least 20 people have been taken into police custody so far.

"Everyone takes to the streets in their district and sees dozens, hundreds and thousands of supporters," Tikhanovskaya, 38, said in a video address posted on her Telegram channel on Saturday.

She added that Belarusians are a "proud, brave and peaceful people that have learned the price of freedom and will never agree to live without it."

Tikhanovskaya fled to EU member Lithuania shortly after the August vote and has received support from several Western leaders, who refuse to recognize the election results.

The European Union has slapped sanctions on Lukashenko and a number of his allies over election rigging and a violent crackdown on demonstrators.

Belarus police detained thousands of protesters in the first days of the demonstrations, with many reporting torture and abuse in custody.

Lukashenko, who has the firm backing of Moscow, has refused to step down and instead has suggested reforms to the constitution to placate the opposition.