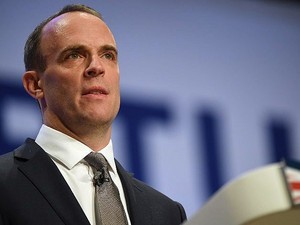 Britain is "concerned" about the possible escalation of tensions in the Middle East following the assassination of a top Iranian nuclear scientist earlier in the week, foreign minister Dominic Raab said Sunday.

"We are concerned about the situation in Iran and the wider region we do want to see de-escalation of tensions," Raab told Sky News when asked about the killing of Mohsen Fakhrizadeh, dubbed by Israel the "father" of Iran's nuclear program.

"We're still waiting to see the full facts, to address the full facts of what's happened in Iran but I would say that we stick to the rule of international humanitarian law which is very clear against targeting civilians," added Raab.

Fakhrizadeh died on Friday after being seriously wounded when assailants targeted his car and engaged in a gunfight with his bodyguards outside Tehran, according to Iran's defense ministry.

Iran President Hassan Rouhani pinned the blame for the killing on "the wicked hands of the global arrogance," a term usually used to refer to the United States.

The US slapped sanctions on Fakhrizadeh in 2008 for "activities and transactions that contributed to the development of Iran's nuclear program."