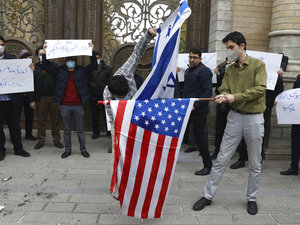 Iran was weighing its response Sunday to the killing of its top nuclear scientist, which it blames on arch-foe Israel, as his body was taken to Shiite shrines ahead of being buried.

Two days after Mohsen Fakhrizadeh died following a firefight between his guards and unidentified gunmen outside Tehran, parliament called in a statement for international inspectors to be barred from nuclear facilities.

President Hassan Rouhani has stressed the country will seek its revenge in "due time" and not be rushed into a "trap."

Israel says Fakhrizadeh was the head of an Iranian military nuclear program, the existence of which the Islamic republic has consistently denied.

His body arrived in the northeastern holy city of Mashhad late Saturday and was taken to the shrine of Imam Reza for prayers and a ceremonial circling of the tomb, state news agency IRNA reported.

The they were taken Sunday to Fatima Masumeh's shrine in Qom, south of Tehran, and later to that of the Islamic republic's founder Imam Khomeini, according to Iranian media.

Fakhrizadeh's funeral will be held Monday in the presence of senior military commanders and his family, the defense ministry said on its website, without specifying where.

Israel has declined to comment on Fakhrizadeh's killing, less than two months before US President-elect Joe Biden is set to take office following four years of hawkish foreign policy under President Donald Trump.

Trump withdrew the U.S. from a multilateral nuclear agreement with Iran in 2018 and then reimposed and beefed up punishing sanctions as part of its "maximum pressure" campaign against Tehran.

Biden has signaled his administration may be prepared to rejoin the accord, but the nuclear scientist's assassination has revived opposition to the deal among Iranian conservatives.

Speaker Mohammad-Bagher Ghalibaf called Sunday for "a strong reaction" that would "deter and take revenge" on those behind the killing of Fakhrizadeh, who was aged 59 according to Iranian media.

In an op-ed on Sunday, the ultraconservative Kayhan daily called for strikes on Israel if it is "proven" to be behind the assassination.

It called for the port city of Haifa to be targeted "in a way that would annihilate its infrastructure and leave a heavy human toll".

That will "certainly achieve deterrence, since the U.S. and the Zionist regime ... are in no way ready to fight a war," it added.

The United States slapped sanctions on Fakhrizadeh in 2008 for "activities and transactions that contributed to the development of Iran's nuclear program."

Almost a year after the US withdrawal, Iran responded by gradually abandoning most of its essential nuclear commitments under the deal.

On Sunday, parliament said the "best response" to Fakhrizadeh's assassination would be to "revive Iran's glorious nuclear industry" by halting the voluntary implementation of the additional protocol, a document which under the 2015 accord prescribes more intrusive inspections of Iran's nuclear facilitates.

In a statement following its meeting, the legislature said the killing showed that Israel, the U.S. and their allies had become "brazen" in their "terror and sabotage" against Iran.

Signed by all 290 members of parliament, the statement called for International Atomic Energy Agency (IAEA) inspectors to be barred from the country's atomic sites, said the legislature's news agency ICANA.

Some MPs had earlier accused inspectors of acting as "spies" and potentially leading to Fakhrizadeh's death.

But the spokesman for Iran's atomic energy organization, Behrouz Kamalvandi, told IRNA on Saturday that the issue of inspectors' access "must be decided on at high levels" of the Islamic republic's leadership.

Tehran representative Mahmoud Nabavian told Tasnim news agency inspectors should be barred "from interviewing experts and scientists, since our mistrust of the (IAEA)'s inspectors has been proven (to be correct)."

"The enemy could have identified martyr Fakhrizadeh either through intelligence work or direct interviews," he added.

Firebrand MP Javad Karimi Ghodousi, had on Friday accused Rouhani of setting up a meeting between Fakhrizadeh and IAEA officials in the past -- a claim strongly denied by the Rouhani administration.