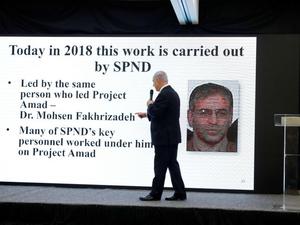 Questions mounted in Israel on Sunday following the assassination of a top Iranian nuclear scientist, with experts speculating on whether Israeli agents were responsible, and if so, how Tehran might respond.

Iran's President Hassan Rouhani has blamed Israel for Friday's killing of 59-year-old Mohsen Fakhrizadeh, accusing it of acting as a U.S. "mercenary" and vowing revenge.

Officials in Israel have declined to comment on the attack near Tehran, which Iran said was carried out by assailants who opened fire on Fakhrizadeh's car before engaging his bodyguards in a gunfight.

The assassination could been have plucked from a script of the new Israeli-made television series "Tehran", which features operatives from the Mossad intelligence agency on a secret mission inside the Islamic Republic.

But if Mossad was responsible, Israeli observers were zeroing in on the significance of the timing.

Did Israel simply see a chance to carry out an operation long in the planning, or was there a direct link to U.S. President Donald Trump's imminent departure from the White House?

For left-leaning Haaretz newspaper, the Trump link was clear.

"The timing of the assassination, even if it was determined by purely operational considerations, is a clear message to President-elect Joe Biden, intended to show Israel's criticism of the intent to return to the nuclear accord with Iran," it said.

Biden has promised a return to diplomacy with Iran after four hawkish years under Trump, who withdrew from the Iran nuclear deal in 2018 and began reimposing crippling sanctions.

Biden has said he will prioritize a revival of the nuclear deal agreed between Tehran and world powers during Barack Obama's administration, in which Biden served as vice president.

Those responsible for the killing "had a short period of time to take action to weaken the Iranian nuclear program and to convince Biden that once he becomes president he should not return to the (nuclear) agreement," he said.

Israeli journalist Ronen Bergman, author of a 2018 book documenting Israel's covert assassination of its enemies over the years, said Sunday that such an attack, deep in enemy territory, "has to be planned for many months, if not for years."

"It cannot be carried out merely by pressing a button," he added, writing in top-selling Israeli daily Yediot Aharonot.

Bergman's piece highlighted Netanyahu's 2018 television appearance to announce that Israeli agents had penetrated a "secret atomic archive" in Tehran and removed tens of thousands of files proving its arms plans.

Netanyahu said that Fakhrizadeh played a central role in those plans, adding "remember this name."

Iran denies its nuclear program has a military purpose.

Rouhani stressed the country would seek its revenge for the attack in "due time" and not be rushed into a "trap."

"I think, in this case, since nobody took responsibility and it's part of the covert war, they might postpone retaliation until at least Trump's last day," Yadlin told journalists.

Tehran could target Israeli scientists, use "proxies" like Lebanon's Hizbullah to attack Israel, "launch missiles from Iran," or target Israeli media, he said.

Kuperwasser warned that Iran had "a wide variety of options" for retaliation and Israel needed to "be ready."

"These are things that embarrass the Iranians and they have to make it clear that they will not live with these types of actions against their interest and retaliate in some type of way," he said.

Israeli Foreign Minister Gabi Ashkenazi was due this week to visit Bahrain, which has just normalized relations with Israel.

But he has canceled the visit to the Gulf state, which like Iran is predominantly Shiite, diplomatic sources told AFP on Sunday.

There was, however, no confirmation that Ashkenazi changed his plans in response to Fakhrizadeh's killing.

Sloumani in January then zadeh in november Thank you Trump !

The biggest question that mounts is: Why didnt they kill Fakhrizadeh long time ago? Surely he had it coming...

The question is always being asked why is it ok for Israel to have nuclear bombs and not others. Regardless of the evilness of the regimes. Look at both Pakistan and India. It's the only way to have true fair peace.