Diab Denies Being Hizbullah's PM, Says Did Not Bow to Bassil 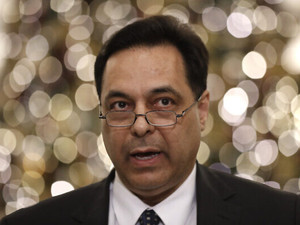 Caretaker Prime Minister Hassan Diab on Sunday denied being “Hizbullah’s candidate” as he noted that he did not bow to Free Patriotic Movement chief Jebran Bassil.

Describing his relation with President Michel Aoun as “very good, cordial and governed by the constitution,” Diab stressed that he did not bow to the will of Aoun’s son-in-law Bassil.

“Those who know me know that I cannot be subjugated,” Diab stressed.

“Unfortunately it has become a culture and we need to destroy this culture and replace it with the culture of the state,” Diab added, decrying that “corruption is what is ruling the state today.”

As for the catastrophic Beirut port explosion, Diab said the blast was “a form of corruption.”

Asked why he postponed a visit to inspect the port’s hangar 12 a few weeks before the explosion, which could have averted the disaster, the caretaker PM said he preferred to wait for concrete information after he received “conflicting reports” about the nature of the stored material.

“To date, my government has not received any satellite images of the Beirut port explosion,” he said about the footage that Lebanon has requested from Western countries.

Asked whether the blast was “deliberate,” Diab said “it is up to the judiciary and not the executive authority to rule on this.”

“Beirut will rise again as it did in the past,” he reassured.

Diab also called for a “technocrat” new government that can address the country’s multiple crises “away from divisions.”

So what are Zeina Akar's qualifications to become minister of defense?

She has a degree in marketing and a social 'scientist':)))! It is all about qualifications according to the diab guy. Her only qualifications are her husband is a friend of Aoun.

The Lebanese people albeit weak and non binding in patriotism have one thing in common, they can smell bull guano a mile away. Any form of the same old same old will not last or make the change for the nation.
Haha! if you believe what you are saying then I rest my case....I respect your opinion, I believe you're sincere, however I also believe that Diab or future Diabs (at least for the time being) won't have any chance to succeed if they don't get a green light from all political parties including Hizb.
unfortunately that's the reality

Useless man. Will go down in the garbage of history as a nobody that achieved nothing...

According to you, what was the reason that he achieved nothing? then according to you what should he have done to achieve satisfactory results?
Same questions apply to Hariri ,Adib and future PM(s)

Where to do the Lebanese politicians go to school to learn the The Art of Lying?