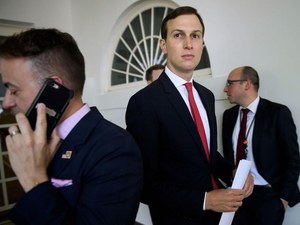 US President Donald Trump's son-in-law and senior adviser Jared Kushner will visit Saudi Arabia and Qatar this week in a bid for further diplomatic deals in the region before leaving the White House, according to media reports Sunday.

The visits would focus on resolving a dispute between Qatar and a Saudi-led alliance, the Wall Street Journal reported, but a number of issues could be on the agenda.

His trip comes days after the assassination of a top Iranian nuclear scientist blamed on Israel, heightening tensions in the region.

The clock is also ticking on Trump's time in office, with President-elect Joe Biden due to be sworn in on January 20.

In recent months, Bahrain and the United Arab Emirates have announced normalization deals with Israel under the so-called Abraham Accords, pursued by the White House represented by Kushner.

Sudan has also agreed in principle to normalize ties with Israel.

Mutual concern over Iran has gradually brought Israel and Gulf nations closer, with US encouragement, and there were reports on November 23 that Israeli Prime Minister Benjamin Netanyahu had held secret talks in Saudi Arabia.

The Israeli media reports fuelled speculation that Israel may be moving closer to normalizing ties with the biggest Gulf power.

Riyadh, however, denied that the meeting between Netanyahu and Prince Mohammed had occurred.

Saudi Arabia has publicly insisted it would stick to the decades-old Arab League position of not having ties with Israel until it reaches a peace deal with the Palestinians.

The Journal reported that Kushner would be joined on the trip by Avi Berkowitz, an assistant to the president, and Brian Hook, who was the administration's pointman on Iran policy until he announced he was stepping down in August.

The dispute between Qatar and the Saudi-led alliance has been long-simmering.

Saudi Arabia, the UAE, Egypt and Bahrain have imposed an air, naval and land embargo on Qatar since June 2017 over their insistence Doha is too close to Iran and radical Islamist groups. Qatar denies the charges.