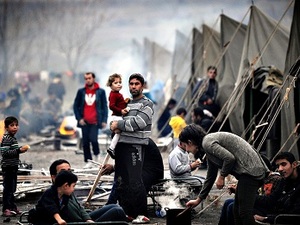 After months of paused efforts to return the Syrian refugees back home, the committee tasked with addressing the file is expected to reactivate the plan’s mechanism this week, the Saudi Asharq el-Awsat newspaper reported on Monday.

Lebanon prepares to host an online international humanitarian conference in this regard, and will recommence the committee that mainly includes the ministries of social affairs, interior, foreign affairs, as confirmed by the general supervisor of the Lebanon Crisis Response Plan (LCRP) Asim Abi Ali to the daily.

“The committee will resume the work it commenced back in July after its halt for months due to the coronavirus pandemic, the port explosion and the resignation of the government,” Abi Ali said in remarks to the daily.

“The committee was waiting for a government to be formed in order to resume its work,” he added, “but Lebanon does not have the luxury of time. We will therefore continue work according to the plan focusing initially on eliminating obstacles, arranging the database, stimulating return, and coordinating with the Syrian state for a guaranteed safe voluntary return,” said Abi Ali.

Before the resignation of PM Hassan Diab’s government, it approved a "general policy paper for the return of displaced Syrians" that was prepared by the Ministry of Social Affairs.

The policy paper was based on eight major principles, most importantly call for “adhering to the displaced Syrians’ right to return, refusing resettlement, as stipulated in the Lebanese constitution, and not forcibly returning or linking the return of the displaced to the political solution in Syria,” added the daily.

Abi Ali stressed on the role of the international community regarding the return, noting that 70 percent of Syrian births in Lebanon, since 2011, are not registered in official records.

Syrians make up one third of the population of Lebanon, which hosts the largest percentage of Syrian refugees relative to its population.

According to government estimates, there are 1.5 million Syrian refugees, only 885 thousand are registered with the United Nations High Commissioner for Refugees.