Grosjean Out of Next F1 GP after Escaping Fiery Crash 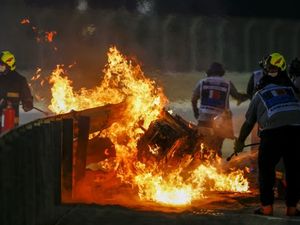 French driver Romain Grosjean, who escaped a fiery crash in the Bahrain Grand Prix with just burns to his hands, will sit out next weekend's race, his team Haas said on Monday.

Grosjean walked away from the wreckage after he collided with Daniil Kyvat's Alpha Tauri on the first lap of Sunday's race, causing the Haas car to split in half and burst into flames as it smashed through the safety barriers.