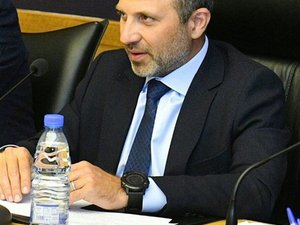 Free Patriotic Movement chief Jebran Bassil on Monday denied setting conditions or demands regarding the new cabinet, stressing that the FPM is only asking for “unified standards.”

In a statement issued by his press office, Bassil described a report published in the Nidaa al-Watan newspaper as “lies and fabrications.”

“To date, the FPM chief has not set a condition nor has he announced a demand or imposed an equation. Everything that the FPM has rather called for is specifying unified principles and standards” for the cabinet formation process, the statement said.

It noted that the Movement would accordingly “take a stance on such a government, be it participation, rejection, support or opposition.”

In its report, Nidaa al-Watan claimed that Bassil has decided to “settle scores” with Prime Minister-designate Saad Hariri and to block any cabinet line-up that does not secure him the representation he wants.

Add to that, before he and father in law became presidents he insisted the President's share in the cabinet was heresy and unconstitutional. Now they go to war for it trying to gouge as many ministers in every cabinet.

Say what you will but this guy is smarter than he looks. The Border negotiations has stopped, the government formation is no where, so expect that the sanctions against Bassil will be lifted a than both things will happen, and perhaps a peace treaty with Israel... I honestly hope I am wrong but that is what I see...

Not too far fetched as it was Aoun who agreed to introduce the new position on maritime borders. Question is, given the public position of the US ambassador, US retreating at this point seems out of the question at least until 01/20.
Even beyond, US risks looking like France now if it were to retreat. Not a bet one normally would take but given the tight spot...
Either way, typical Lebanese attitude - me first and the rest who cares. Lamentable catch 22 Lebanon is in.

Guess who is anti-corruption.....

2 conditions for the continued existence of Lebanon:
1) all warlords and their political friends must disappear from the political arena.
more difficult is the second one.
2) the people must learn to stop thinking "my religion determines my political color"; the people must be aware we are in the 21st century, crusaders / inquisitions are centuries ago. religion is private matter and not political color.
the one up Lebanon mash Lebanon mouslem is stupid and retarded and contributor to the misery of the country

Nasrallah has assigned his minions clear and very defined roles to waste time; Berri insists on the finance portfolio which prompts Bassil to insist on the so called unified standards that he's never adhered to in the first place. Aoun argue he should names all the Christian ministers and then goes to sleep. When or if this issue is resolved, they'll revive the Arslan and Catholic representation and the 20 member cabinet. Once they have that the so called Consultative Gathering, supported by Hezballah, will spring into action and demand a Sunni minister. This will continues until Iran gives Nasrallah the greenlight. In the meantime hapless Hariri is still way over his head insisting on making everyone happy that is except the suffering people of Lebanon.

lol I am sure his wife knows about the mistress.

It is common knowledge this nobody has numerous ex-marital affairs. On every trip he takes outside Lebanon he is accompanied by an entourage of advisors among them is what appears to be a female assistant or two who happen to be his girlfriend(s).

So he is saying the same thing---he is setting conditions, but calling them 'standards'. So, he wants to put FPM in charge of the non energy sector so he and his minions can get rich and leave the Lebanese out of power. Add to that the lack of a government and governance, no economy either.

The POS is not setting conditions but standards on forming governments in Lebanon! Who is this POS for to set such standards.