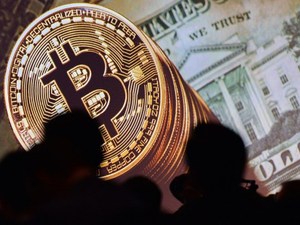 The currency soared past its previous high of $19,783 to hit 19,800 with some sector analysts forecasting it will soon breach the 20,000 resistance point.

Debate has raged over the status of the digital asset, launched in late 2008, as to whether it should be seen as a form of money, an asset or a commodity.

Monday saw it rise some 8 percent, taking its yearly rise past 150 percent, according to data compiled by Bloomberg, a far cry from the few cents it traded at in its early days which followed on the heels of the global financial crash.

The unit, which regularly sees its value suffer wild swings, had slipped back to &19,380 by mid afternoon, for a day rise of 6.5 percent, leaving its total market capitalization at around $360 billion.

Since October the 'digital gold' has risen some 40 percent, spurred notably by PayPal online payments giant saying it would enable account holders to use cryptocurrency.

The California-based firm also said the new service will also permit customers to buy, hold and sell cryptocurrency units and use them for payments at retailers.

After its initial December 2017 tear, bitcoin saw its market value plummet by some three quarters in the months that followed.

A number of central banks have responded to the rise of cryptocurrencies and the dwindling global use of cash by announcing plans for bank-backed digital units that would be 'risk free' like fiat banknotes and coin.

Several central banks including those of China and Sweden -- but also the US Federal Reserve -- are also testing digital applications in response to Facebook's recent moves to produce its own digital unit, Libra.

Unregulated by any central bank, bitcoin emerged as an attractive option for investors with an appetite for the exotic -- although criminals have also seen its under-the-radar appeal.

After the unit surpassed $1,000 for the first time in 2013, it increasingly began to attract the attention of financial institutions.

Late week, it emerged that hedge fund Guggenheim Partners revealed in a regulatory filing it is considering earmarking around $530 million for an investment in bitcoin via a private investment vehicle.