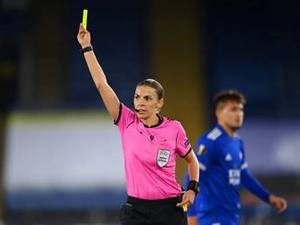 The 36-year-old has already made history as the first woman to referee in the French top flight, and took charge of the 2019 UEFA Super Cup final between Liverpool and Chelsea. She also made her Europa League debut in October.

It is the first time that a woman has been assigned to referee a game in Europe's most prestigious club competition.

Juventus, second in the group, are already through to the last 16 along with leaders Barcelona, with two games to play.