Embattled Loew to Stay On as Germany Coach for Euros 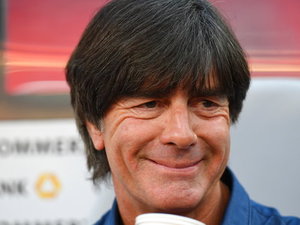 Joachim Loew will remain in charge of Germany for next year's delayed European Championship despite a series of poor recent results, the German football federation (DFB) announced Monday.

"The presidential committee of the DFB decided unanimously this Monday during a teleconference to continue with coach Joachim Loew on the difficult path of renewal started in March 2019," the DFB said in a statement, following a meeting with Loew and the federation's top officials.

Loew, 60, has been in charge of the Germany team since taking over from Jurgen Klinsmann following the 2006 World Cup.

He led the nation to a fourth world title, and first since reunification, in Brazil in 2014 when the Germans defeated Lionel Messi's Argentina in the final.

However, Germany are in crisis following a 6-0 defeat to Spain on November 17 and recent draws with Switzerland, twice, and Turkey.

The recent hammering by Spain, Germany's heaviest loss in 89 years, capped a poor three-year spell, which included an embarrassing group-stage exit at the 2018 World Cup in Russia after which the DFB gave Loew their backing.

Loew has made some controversial decisions since the debacle in Russia, none more so than the one to end the international careers of World Cup winners Thomas Mueller, Jerome Boateng and Mats Hummels.

The DFB's 14-member presidential committee had initially been due to meet Friday to determine Loew's fate.

However, the group brought its decision forward, aligning itself with the views of the "management committee and national team director Oliver Bierhoff", the DFB added.

"During this meeting, Joachim Loew informed the participants of his analysis, his ideas and his projects," the statement continued.

"The members of the management committee unanimously concluded that the high-quality work of the coaching staff, the sound relationship between the coach and the team, and a clear idea of the course followed so far and to come were valid arguments."

It added: "A one-off match cannot and must not be used as a measure for the overall performance of the national team and coach.

"Our eyes must remain fixed on the preparations for the Euros next year. We have the firm conviction that Joachim Loew and his staff will succeed... despite a difficult situation for everyone."

While Loew is under contract until the 2022 World Cup in Qatar, his position could again come under scrutiny at the Euros, which were postponed by a year due to the coronavirus pandemic.

Germany have been drawn in a tough group at the finals with defending champions Portugal, World Cup holders France and Hungary.