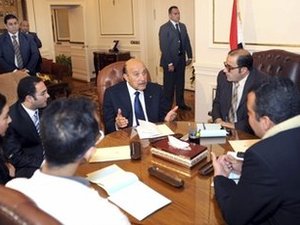 Opponents of Egyptian President Hosni Mubarak's embattled regime on Sunday dismissed as insufficient an offer to include them in political reform plans and renewed their demand that he step down.

In a landmark concession, Vice President Omar Suleiman agreed to sit down with the groups, which included the banned Muslim Brotherhood, but the talks produced no immediate breakthrough in the two-week-old standoff.

As night fell, central Cairo's now iconic Tahrir Square was still filled with thousands of anti-regime protesters, adamant that the start of dialogue will not divert them from their campaign to unseat Egypt's strongman.

"It's bullshit. That's my honest opinion," said 25-year-old Nora Abul Samra. "When he leaves they can do whatever they want. They still believe there is a constitutional way to do it, but this is a revolution."

After two weeks of mass street protests and more than 300 deaths -- and with global pressure mounting on Suleiman to negotiate a peaceful transition to more democratic rule -- the government met its most powerful foes.

Government spokesman Magdi Radi said the parties agreed to form a committee of judges and politicians "to study and propose constitutional amendments and required legislative amendments ... by the first week of March."

Negotiators also agreed to open an office for complaints about the treatment of political prisoners, loosen media curbs, to lift an emergency law "depending on the security situation," and reject foreign interference.

But Suleiman refused another key demand of the opposition, saying he would not assume Mubarak's powers and rule in his stead during the transition.

Not all of the opposition movements involved in the 13-day-old uprising against Mubarak's rule were present at the talks, with former U.N. nuclear watchdog head and leading dissident Mohammed ElBaradei notably not invited.

Other opposition leaders met Suleiman in a palatial government hall under a huge portrait of the absent Mubarak. The Muslim Brotherhood, although represented despite the ban, left unsatisfied by the outcome.

Mahmud Ezzat, the Brotherhood's number two leader, told Agence France Presse by telephone that the group had not pulled out of the talks because it felt it had made progress, but warned that street protests would continue.

In his view, by sitting down with the opposition, the regime had tacitly "admitted that this is a popular revolution and its demands are legitimate. And one of our demands is that the president must leave."

Another senior Brotherhood figure, Essam al-Erian, told reporters: "Our demands are still the same. They didn't respond to most of our demands. They only responded to some of our demands, but in a superficial way.

Some of the undaunted protesters celebrated Christian prayers in the central Cairo square, the epicenter and symbol of the revolt, in memory of the estimated 300 people killed since demonstrations against Mubarak broke out.

Meanwhile, a measure of normal life began to return to the biggest city in the Arab world, with queues forming in front of banks that had been shut for more than a week and workmen scrubbing down shopfronts.

Mubarak has thus far refused demands to step down immediately, insisting that while he is "fed up" with leadership, he feels he must stay on until a promised September presidential election in order to ensure stability.

The crisis has given U.S. President Barack Obama's administration a policy headache, forcing it to confront the consequences of Washington's long-term support for Middle East autocrats in exchange for security guarantees.

Some Western observers have expressed concern the Brotherhood could sweep to power and institute an Islamist regime that would be no more democratic than that of Mubarak and could break Egypt's close alliance with Washington.

"Today we learned the Muslim Brotherhood decided to participate, which suggests they at least are now involved in the dialogue that we have encouraged," Clinton told National Public Radio.

"We're going to wait and see how this develops, but we've been very clear about what we expect," she said.