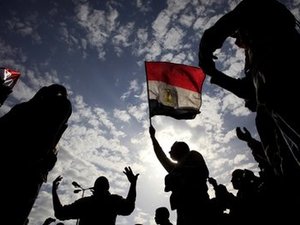 Some of the main groups behind Egypt's opposition revolt formed a coalition on Sunday, insisting they will not end their occupation of Tahrir Square until President Hosni Mubarak leaves office.

A statement by the "unified leadership of the youth of the rage revolution" vowed not to end their protest in the central Cairo square until seven demands are met -- chief among them "the resignation of the president."

The statement was read by Ziad al-Ulaimi at a news conference. He is one of six leaders of the coalition, which he said was formed on January 24, a day before the demonstrations began.

The coalition unites youth representatives of the April 6 movement, the Justice and Freedom group, the Door-Knocking Campaign, the Popular Campaign in Support of (former U.N. nuclear watchdog chief Mohammed) ElBaradei, the Muslim Brotherhood and the Democratic Front Party.

Other demands of the coalition include the lifting of Egypt's long-standing emergency law, the dissolution of parliament and a national unity government to secure a peaceful transition of power and oversee constitutional reform.

They also want a judicial committee to probe the "collapse of security last week and the killing and wounding of thousands of people."

The coalition urged the Egyptian army to protect demonstrators from "the violence of criminals and thugs belonging to the corrupt regime, and to secure a supply of food and medical material to the demonstrators."

The leadership demanded the release of all of its detained comrades, "at the forefront our colleague Wael Ghoneim" who was arrested on January 26, the day after the mass demonstrations began.

Ulaimi estimated the number of detainees to be around 500.

"We want an end to this crisis as soon as possible, and we want normal life to return ... but we do not trust Hosni Mubarak to lead a transitional period," said the statement.

"He is the one who for 30 years rejected any peaceful political and economic reform," it added.

But Ulaimi admitted: "This is not a leadership of the whole Egyptian people. It is the leadership of organized groups within the ongoing movement."

Islam Lutfi, a member of the committee, urged people to reject claims that the revolt was behind making their lives difficult, accusing the government of shutting down vital economic sectors to turn people against the protesters.

"The revolution did not enforce a curfew, order banks to close or stop transportation of food supplies between the provinces," he said.

Meanwhile, they rejected government claims that a group representing the youth of the protest had met Omar Suleiman, the recently appointed vice president who launched talks on Sunday with some opposition groups.

"Anyone negotiating now with Omar Suleiman does not represent the youth who are present in the square," group member Ahmed Maher said.

The coalition also called for a national salvation front bringing together groups present on the ground to form a united front against the government.

"The seriousness of the situation necessitates the formation of a wide national salvation front so that its voice would be heard in face of the government's voice," he said.