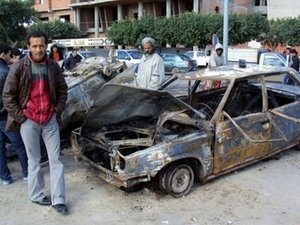 Tunisia's interim government moved Sunday to ban the country's former ruling party as fresh violence left one youth dead in the country's south during protests against the remnants of the old regime.

Fahrat Rajhi, in a statement read out on national television, said the long-feared RCD was suspended from all political activity and that its offices throughout the country would be shut down.

"With the aim of preserving the supreme interest of the nation and to avoid any violation of the law, the minister of the interior has decided to suspend all the activities of the RCD, to ban all meetings or gatherings organized by its members and to shut offices belonging to this party or managed by it," said the statement.

Rajhi said the measures were taken "ahead of presenting an official request to the courts with a view to its dissolution".

Three weeks after Ben Ali was ousted in a popular revolt that has reverberated across the Arab world, Tunisia is still mired in turmoil.

Protesters have been calling for the removal of old-regime officials and warning against any attempt to hijack their revolution.

In the southern town of Kebili, one youth died overnight after he was hit by a tear gas canister during clashes with security forces, the state news agency TAP reported.

The agency said security forces intervened after a gang of youths tried to attack and set fire to a National Guard post outside the town.

TAP also reported sit-ins and demonstrations outside the governor's office in Kebili Saturday in protest at the appointment of a new governor.

The army was also deployed in the northwestern town of Kef where four people were reported killed the day before and where protesters set a police station ablaze amid fresh clashes Sunday.

"The roving gangs of young looters have vanished but people are very much on their guard and are afraid of going out," he added.

Firefighters, protected by army troops, had brought the blaze at the police station under control.

"Police are nowhere to be seen. The army has been deployed" at the town's strategic locations and outside the main public buildings, Hadaoui said.

An interior ministry source said that two people were killed and 13 injured, including four policemen, in the weekend unrest in Kef, without giving further details.

Several hundred demonstrators had been calling for Kef police chief Khaled Ghazouani to be sacked for abuse of power, according to TAP.

The situation degenerated on Saturday when Ghazouani slapped one of the protesters and the crowd tried to rush the police station and set it ablaze.

Two of those injured later died of their wounds, union activists and a local resident told Agence France Presse later Saturday. A union source said Ghazouani had subsequently been arrested.

From Tunis, the head of a visiting European Parliament delegation Jose Ignacio Salafranca, called for an inquiry "to identify those guilty" of the Kef deaths.

Meanwhile the new governor of the west-central town of Gafsa was forced to leave his office in an army vehicle as protesters demanded he quit office, TAP reported.

The interim government, which replaced top police chiefs and the governors of all of Tunisia's 24 provinces just days before, had hoped the move would help calm the unrest.

But protesters and opposition politicians are calling for a more thorough shakeup, judging some of the newly named governors too close to the old regime.

TAP meanwhile reported the arrests of two members of the security forces suspected over the deaths of two detainees in Sidi Bouzid, in the center of the country.

It was in Sidi Bouzid that a young man, Mohammed Bouazizi, died after setting himself on fire on December 17, triggering the uprising.