Phalange Asks for Veto Power, Waits for Answers from Miqati 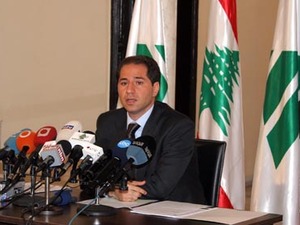 Phalange party official Sami Gemayel denied that he was being named to fill a cabinet seat and hinted that the March 14 alliance would participate in the government only if it gets veto power.

While criticizing “the huge concessions made by the March 14 forces,” Gemayel said: “These concessions and the results of negotiations on the international tribunal led us to where we stand today.”

“Some things cannot be subjected to a compromise, particularly the issue of Hizbullah’s arms and justice linked to the international tribunal,” he stressed.

He said his party was still waiting for answers from Premier-designate Najib Miqati before deciding on participation in the government.

“We want real partnership in running the government. We demand guarantees (from Miqati) concerning the international tribunal and the arms,” Gemayel told The Daily Star.

Asked whether the party was seeking a public commitment from Miqati not to end Lebanon’s cooperation with the tribunal, Gemayel said: “We want guarantees that the international tribunal will not be abolished.”

Hinting that the March 14 forces were conditioning their participation in the cabinet on veto power, Gemayel said: “Let them give us the one-third (of seats).”

“We won’t accept a one-sided cabinet that goes ahead with its rejection of international resolutions and makes unilateral appointments, taking the country into a single direction,” the MP stressed.

Gemayel added that contacts between the Phalange and Miqati were continuing in an attempt to iron out political differences.

If it eventually decides to participate, the party will have two ministers in the new government, a source close to Miqati told The Daily Star. The Phalange had one representative in ex-Premier Saad Hariri’s cabinet.

However, informed politicians ruled out to An Nahar daily that the Phalange would participate in Miqati’s government without its allies in the March 14 alliance.

The party’s sources told OTV that the Phalange won’t accept to participate without its allies even if granted three portfolios.

MP Elie Marouni confirmed to Free Lebanon radio that the Phalange is keen on its ties with its allies and the foundations of the Cedar revolution. It “won’t participate in the cabinet without its allies,” he said.